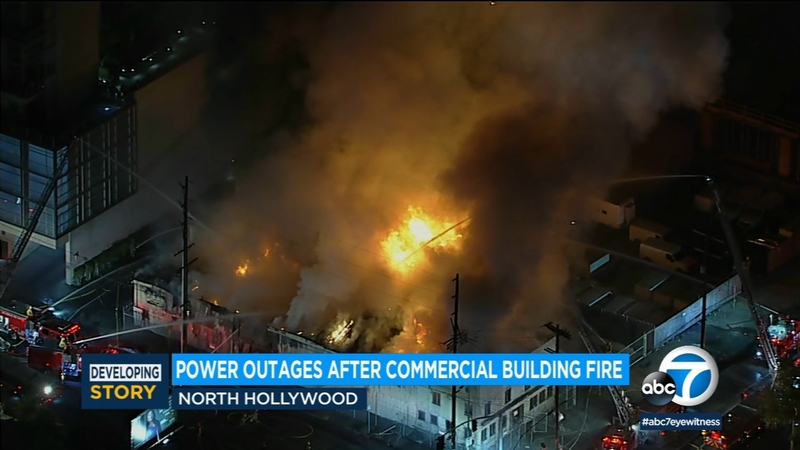 NORTH HOLLYWOOD, LOS ANGELES (KABC) -- A blaze destroyed two buildings and knocked out power to over 1,000 customers in North Hollywood Monday night before firefighters were able to extinguish the flames.

Massive plumes of smoke billowed into the sky as more than 100 Los Angeles firefighters scrambled to prevent the flames from spreading to another building under construction.

Firefighters also responded to a high-rise apartment building on the north side of the fire due to smoke entering the structure.

Crews were able to save the building under construction, while no medical complaints were received from residents of the high-rise, despite thick smoke over the area.

"The building was not at risk of fire exposure, only residual smoke which blanketed the area," Margaret Stewart of the LAFD said.

Firefighters were called just after 9 p.m. to an approximately 60-foot-by-100-foot, single-story building at 5400 Tujunga Ave., near Chandler Boulevard, and found the building fully engulfed in flames.

The building was well-involved in fire and flames spread to a second building, Stewart said

No injuries were reported by LAFD, but the blaze downed power lines and the roof of the building where the fire raged collapsed.

According to Southern California Edison, more than 1,600 customers in the immediate area remained without power Tuesday morning. The utility said restoring power to those affected will continue through the day.

The effort by firefighters to contain the flames lasted nearly two hours, according to LAFD.

Firefighters say the blaze started as a rubbish fire that extended to nearby structures.