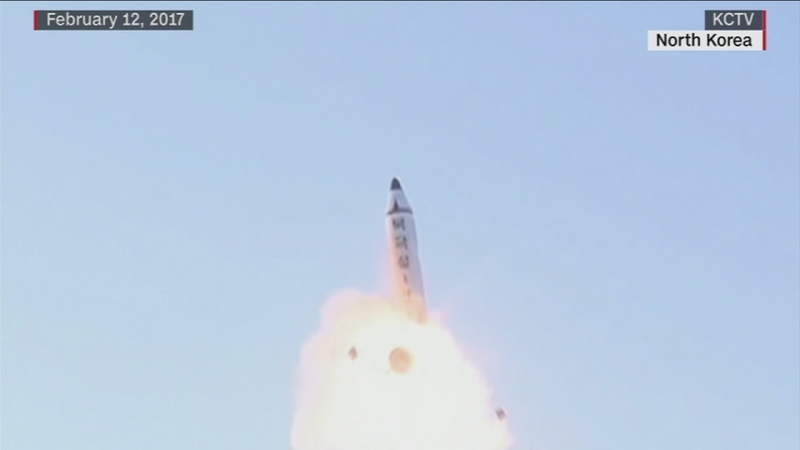 WASHINGTON (KABC) -- North Korea fired a ballistic missile on Tuesday, making it the first in over two months.

Hours later, President Donald Trump told reporters the United States will "take care of it" and that "it is a situation that we will handle."

Pres. Trump on North Korean missile launch: "We will take care of it...It is a situation that we will handle." https://t.co/Q2YoGitJ3n pic.twitter.com/wO4XnIxRbb

At the time of the launch, Trump was in a meeting with Senate Republicans on Capitol Hill. Press secretary Sarah Sanders tweeted that Trump "was briefed, while missile was still in the air, on the situation in North Korea."

Defense Secretary Jim Mattis said North Korea is continuing to build missiles that can "threaten everywhere in the world," and added that the missile flew higher than its previous projectiles.

He went on to say that South Korea has fired pinpoint missiles into surrounding waters to make certain that North Korea understands it can be "taken under fire" by the South.

North Korea's last test of a ballistic missile was on Sept. 15, an intermediate-range KN-17 that flew over the Japanese island of Hokkaido.

The first missile test was fired less than a month after Trump was inaugurated. Between March and May, North Korea conducted tests every one to two weeks.

In August, Trump threatened the regime with "fire and fury like the world has never seen." The strong statement led to a response from North Korean leader Kim Jong Un, who said he would consider sending missiles off the coast of Guam. Just weeks later, North Korea fired three short-range ballistic missiles not toward Guam but into the Sea of Japan.

MORE: Trump warns North Korea: 'Do not underestimate us, do not try us'

The Trump administration has said all military options are on the table when dealing with a threat from North Korea, but top U.S. officials have consistently emphasized the U.S. is pursuing a diplomatically-led effort.