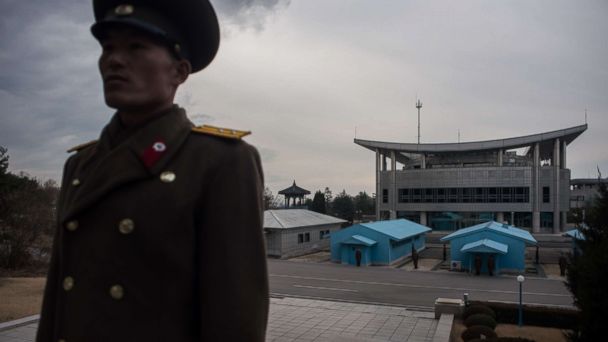 North Korea has changed its tune -- at least along the DMZ, or Korean Demilitarized Zone, a two-and-a-half-mile-wide buffer of landmines and booby traps that separates it from South Korea.

For years, giant speakers at North Korea's propaganda village, Kijong-dong, would blast a looping playlist of martial speeches. But since the Winter Olympics began earlier this month in Pyeongchang, South Korea, the speeches, which some American officers say they can recite nearly word for word, have given way to pleasant choral and folk music, according to United Nations Command officials.

"Instead of a lot of the hard-line speeches, it has gotten softer," Lt. Cmdr. Daniel McShane, a United Nations Command duty officer who has been posted at the DMZ for five years, told ABC News during a visit to the site Wednesday. "We've been hearing a lot more music, and a lot of it has been more classical, especially at night."

The new playlist may point to a wider thaw in the 65-year-old cold war that has dominated the Korean Peninsula since the communist North invaded the South in June 1950. Relations also appeared to warm when North Korean leader Kim Jong Un dispatched his sister and the president of the country's puppet parliament to represent him at the Olympics.

North Korea also sent a cheerleading team and a marching band, and the nation's athletes marched under a unified flag with the South Koreans.

McShane said North Korea's different musical offerings near the border "could be just because there's a good number of North Korean citizens here."

"Or," McShane added, "it could just be a coincidence. Maybe they've run out of speeches."

Not much else has changed near the DMZ. Although diplomats from both the North and South recently met at the so-called Peace House, tensions remain, McShane said. Communicating with North Korea remains challenging. In 2013, representatives of North Korea stopped answering a hotline phone that had connected them to the U.S.-led United Nations command.

When messages must be sent, especially complaints about armistice violations, an American officer will descend from a command post, walk between the iconic blue huts, around the sunglasses-wearing South Korean guards, and signal for a translator who, from the very edge of South Korea, must literally yell into North Korea.