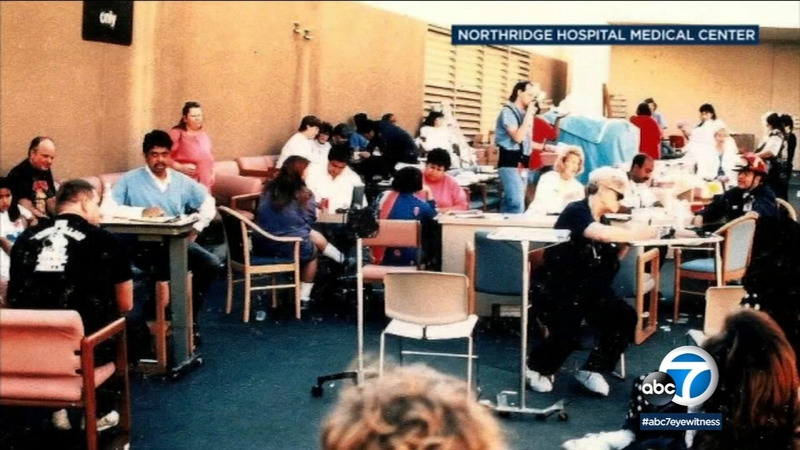 NORTHRIDGE, LOS ANGELES (KABC) -- On the 25th anniversary of the Northridge Earthquake, doctors at Dignity Health - Northridge Hospital Medical Center looked back on the devastation and chaos that followed after the deadly 1994 temblor.

Though the hospital was badly hit, the staff immediately went into triage mode, treating those who were injured.

Now, when an earthquake strikes, the Shake Alert system at Northridge Hospital Medical Center will warn everyone with a loud message: Expect shaking. Drop, cover and hold on!

The panic of the 1994 Northridge Earthquake may have subsided, but fears of a stronger temblor are pushing policies to safeguard the public.

"It really depends how far the earthquake is. It can give us anywhere from a few seconds to a full minute of warning. We are the first hospital to be approved as a pilot program," said Roozy Moabery, technical adviser for the hospital's Shake Alert program.

When the Northridge quake struck, technology like this was unthinkable. Dr. Stephen Jones was a staff physician working in the emergency department where they treated nearly 1,000 people in the 48 hours following the quake.

"(I) remember the earthquake occurred at night time. It was dark. People would jump out of bed, and one of the most common injuries we saw was cut feet, abrasions and lacerations because there was broken glass. The serious things were heart attacks because of the stress involved in going through 45 seconds of shaking like that," Jones said.

After the quake, a trauma bay was used as a treatment area. The staff put in dozens of chairs and extra beds, and because of the aftershocks, incoming patients had to be checked outside.

"We decided to keep triage outside just because we didn't know with certainty," Jones said.

Tap water was undrinkable. Equipment ran on battery and generator power, and the elevators didn't work.

"The building has undergone a retrofit, a complete retrofit," said Paul Watkins, CEO of Dignity Health - Northridge Hospital Medical Center. "We need to be the only building, so to speak, with the lights on in a real disaster."

But hospital leaders know being structurally fit isn't enough. Preparedness means the staff needs to be mentally and emotionally fit.

His advice is to keep shoes by the bed and to take pictures of your prescription medicines.