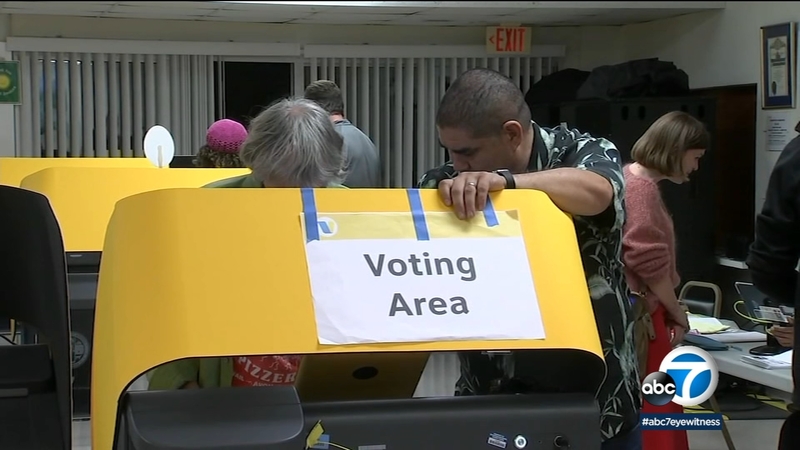 LOS ANGELES (KABC) -- Scores of voters stood in line for hours on Super Tuesday at some California precincts, including in Los Angeles County where a new voting system and a bevy of new statewide election reforms conspired to slow the process.

County Supervisor Janice Hahn called for a thorough investigation into the cause of the long wait times, which she described as "unacceptable."

Hahn noted that at one vote center, six of the 30 voting machines were not functional on Election Day. She also expressed frustration that technicians were not ready to fix the machines when they broke down.

"Everything we were doing was trying to make voting more accessible, easier, more convenient for people," Hahn told reporters. "So we need to find out whether or not that happened, or if some of the problems actually resulted in it not being easy and accessible for people."

The L.A. County Registrar apologized for the extended wait times, with hundreds of voters still in line at polling places after 8 p.m. Tuesday.

However, there are differing opinions on the voting experience, depending on when people voted. Those who voted early in the 11 days leading up to the primary were pleased with the experience. While those who voted on Election Day were frustrated after waiting up to four hours.

"I don't have a choice. I mean, I've gotta get my vote in. But it's disgusting," said one woman at the registrar headquarters in Norwalk.

The delays appeared to be linked to the new electronic voting system that the county started using this year. At some places, there were technical issues that couldn't be solved. At others, there weren't enough voting machines.

Beverly Hills City Councilman Julian Gold said waiting times there were 2 1/2 to 3 hours. He added that he was told the delays were related to voter check-in.
"There's a lot of frustration (and) people walk away," he said. "I don't know if they'll come back. I hope they do."

At a vote center in Silver Lake, poll workers said computer network issues slowed the voter check-in process and made some machines unusable. About one-third of the approximately 40 machines were being used, and some had "out of order" signs taped to them. The resulting line meant it took about an hour for voters to cast their ballot.

Electronic poll books that are connected to the state's voter database were operating slowly because of the high number of voters, County Registrar-Recorder spokesman Mike Sanchez said. The county brought in technicians and added devices in some polling places to move lines along.

Although voters could cast their ballots 11 days prior to Election Day at any vote center, there were fewer polling places compared to previous years.

L.A. County Registrar-Recorder Dean Logan apologized Tuesday night, saying there is a lot to be learned from the experience. He said that a good deal of the responsibility falls on his and his office's shoulders as they try to figure out how to resolve issues before the November election.
"I think that what we also learned is that some of that model needs quite a bit of refinement. The logistics and the coordination of opening vote centers that are available to voters to go to any location over the course of 11 days is a pretty steep hill to climb," Logan said.

The L.A. County Democratic Party chair released a statement about low voter turnout, with 20% of eligible voters casting their ballot.