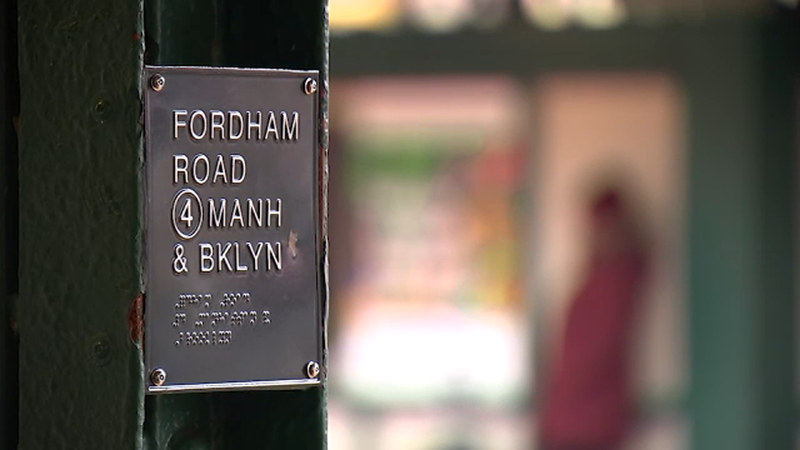 NEW YORK CITY -- A father caught on camera yanking the hair of one his sons at a Bronx subway station has been identified, though he is not yet facing charges in the incident despite being arrested over the weekend in another matter.

Detectives spoke to 35-year-old Joshua Gilead while investigating his apparent assault. The incident happened while he was sitting with his children - ages 7 and 9 - on a bench at the Jerome Avenue/East Fordham Road subway station around 9 p.m. last Friday.

Facebook video shows an adult male sitting in between two kids, yelling at them while visibly angry. Multiple times, he is seen yanking one of the children's hair and physically abusing that child.

"That's messed up," Bronx resident Roberto Melendez said. "That wrong, why would you do that to a child?"

"It takes courage." A waitress in Florida is being called a hero for recognizing the plight of a little boy, and getting creative in order to get him help.

The investigation is continuing, and police say Gilead was arrested just after 2 a.m. Saturday for his alleged role in a domestic dispute.

Authorities say Gilead, who has joint custody, took his two children from his wife's Bronx apartment. The two reportedly have a tumultuous relationship.

She went to the 48th Precinct to file a harassment complaint, and the New York City Administration for Children's Services sent case workers to Gilead's East Harlem apartment, where they observed injuries on his two children, "including hand marks and bruises on his back and a bruise on his arm."

Police were called, and Gilead was charged with felony assault and endangering the welfare of a child.

Prosecutors in the Manhattan District Attorney's office asked for $30,000 bail at his arraignment, but the judge released Gilead on supervised release. After he was released, the video surfaced of the Bronx subway assault.

Gilead was identified from the video Wednesday, and detectives will now have to re-interview his children to determine when and where their injuries occurred, and what additional charges are applicable.

The NYPD and Bronx District Attorney's Child Abuse Bureau are both investigating the Bronx subway incident. The children are now in the custody of their mother.

Almost three dozen missing children, including eight who were being sexually exploited at the time of recovery, have been found in the Southland during a recent operation, the FBI announced Friday.

There were no further details available about Gilead's weekend arrest.

Bronx Community Advocate Tony Herbert is also in the middle of advising a 31-year-old female victim who was assaulted in Harlem because she turned down a male's offer to pay for her wine.

"I am in tears and feeling all levels of anger watching this video where this guy is terrorizing these kids and hurting them," he said. "I am a father of three boys, and seeing this abuse screams we need to help and protect them. Someone got to know them if we can just get the video out to the public. Maybe their mother doesn't know he is doing this to them."

The Administration for Children's Services released a statement on the incident.

"Our top priority is protecting the safety and wellbeing of all children in New York City. We are investigating this case with the NYPD."

Anyone with additional information in regard to this incident is asked to call the NYPD's Crime Stoppers Hotline at 1-800-577-TIPS (8477) or for Spanish, 1-888-57-PISTA (74782). The public can also submit their tips by logging onto the CrimeStoppers website at WWW.NYPDCRIMESTOPPERS.COM or on Twitter @NYPDTips. All calls are strictly confidential.