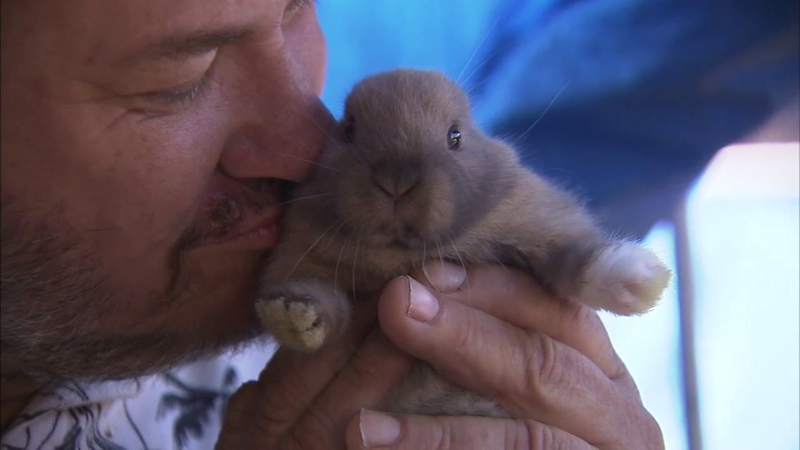 CYPRESS, Calif. (KABC) -- At his home in Cypress on Thursday, Rick Searles held one of 30 rabbits he kept in his possession after officials seized 200 such animals from the residence.

"He's priceless. I love him," Searles of Bun Bun Jr., an offspring of the first two bunnies that the Orange County man owned.

Searles said he has spent the past several years rescuing other rabbits -- until the bunny population took over the backyard of the home -- and led to a visit by OC Animal Care officers Wednesday.

"They weren't bothering anybody. They didn't make noise. They're pretty clean," said Searles, 58, who lives in the home where he grew up in the 10000 block of Tammy Street.

According to authorities, a neighbor complained to the city, prompting an investigation.

"We went out and responded and spoke with the owner and recognized that he was in over his head," said Katie Ingram, assistant director of OC Animal Care.

Authorities said they found many rabbits in cages, but others had burrowed underground and procreated. Searles said he was spending more than $200 a week for rabbit food and hay for bedding.

County officials said that although the bunnies found in the home were well cared for, the sheer number -- in such a small space -- posed a possible health risk to the community. Officers seized 200 rabbits.

"It was hard because they were looking at me like, am I supposed to do something or stop it," recalled Searles.

"Spay and neutering the remaining bunnies is really key. It's critical," said Ingram.

Searles says he would do that, to control the population. OC Animal Care officials said the agency it's working with him to make sure.

The seized bunnies are up for adoption at the OC Animal Care facility located at 561 The City Drive South in the city of Orange. They can also be seen online at ocpetinfo.com