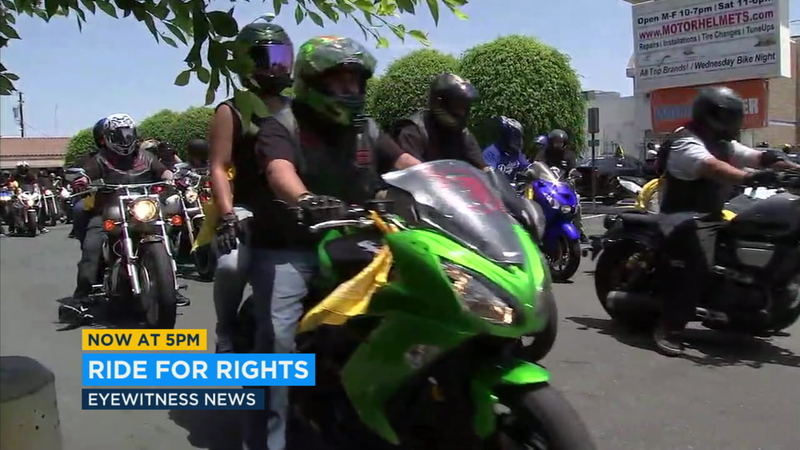 SANTA ANA, Calif. (KABC) -- The biker community was out in force Sunday in Orange County to show their support for a rider involved in an incident with the CHP.

They claim he was intentionally knocked over by the officer in the Inland Empire encounter caught on video.

On May 27, a group of motorcyclists was riding from the City of Industry to a fundraiser in Rancho Cucamonga.

CHP officials say the group was on the eastbound 210 Freeway when one of the riders illegally passed a car on the right shoulder.

An officer tried to pull over the rider.

In the video, it appears the motorcyclist is fleeing from the officer. The CHP cruiser catches up and appears to cut him off as the two collide, throwing the biker to the ground.

The rider was hospitalized and later arrested for felony evading.

Other motorcyclists were angry at the CHP, claiming the officer intentionally knocked the rider over.

That rider seen on video, Raul Garcia, participated in this Sunday's Ride for Rights event in Fullerton. The event was meant to raise awareness of motorcyclists' rights.

Garcia said Sunday he didn't realize at the time the officer was pulling him over. He says he tried to pull over, but the officer knocked him down.

"I didn't even know he was after me," Garcia said. "So once I noticed him after me, I tried to pull over. But you guys seen the videos - he's the one who ran me off my bike."

He said it felt good to be back on his bike again, and he had to overcome some fear of riding to return to the road.

The CHP says it is investigating the incident.