The company that owns the pipeline has said that no more than 126,000 gallons leaked, but they also told said it may be less.
KABC
By Jessica De Nova 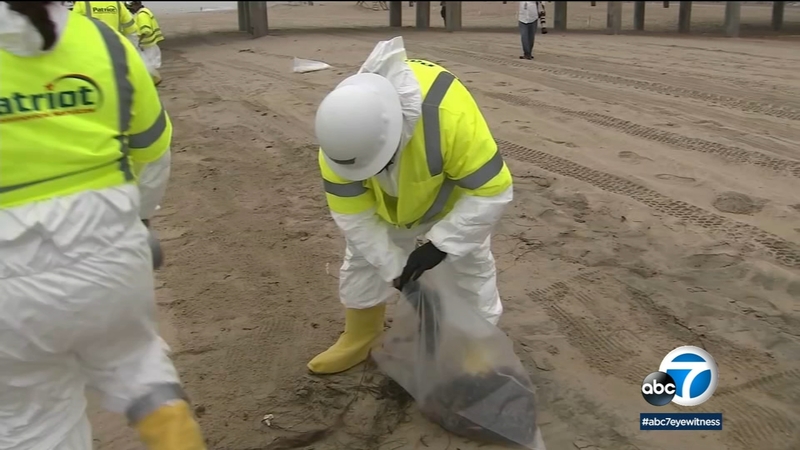 HUNTINGTON BEACH, Calif. (KABC) -- Nearly a week since oil first appeared in the waters off Southern California, how much oil leaked from a ruptured underwater pipeline is still unknown-though experts say the amount should be easy to calculate.

While there isn't a firm tally, plenty of numbers have been floated.

Officials on Thursday also updated their estimates of the size of the spill.

Initial estimates in the days after the spill were that at least 126,000 gallons of oil had leaked into the ocean. Officials are now saying a lower number is within the range of possibilities but the analysis continues.

Authorities say their current estimates range from a minimum of about 25,000 gallons to a worst-case scenario of more than 131,000 gallons.

The investigation into what caused a massive oil spill off the Orange County coast continues to focus on ships that passed through the area even as environmentalists try to contain and repair the damage to local wildlife and habitats.

David Pettit, a senior attorney at Natural Resources Defense Council who worked on the response to the massive Deepwater Horizon oil spill in the Gulf of Mexico, said the amount of oil spilled into the ocean should be easily and quickly known to Amplify.

"If they know what the flow rate was in the pipeline, and how much the pressure dropped, and for how long, you could calculate that in a matter of minutes," Pettit said.

"This is money to them," he added. "They know how much they lost, I am certain of that."
Local officials, who feared an environmental catastrophe at first, have more recently voiced hope that the total spillage will be less than initially feared when a putrid smell swept the coast south of Los Angeles last weekend and blobs of crude began washing ashore.

California Gov. Gavin Newsom offered some optimism about the size of the spill when he visited the site on Tuesday. But he cautioned the cleanup still requires massive resources and residents still can't fully use their beloved beaches or swim and surf in the waters in the affected area that stretches about 15 miles from Huntington Beach to Laguna Beach.

"You still have the spread, even if it's substantially less gallons, that have to be cleaned up," Newsom said. "So this is going to take time to clean up."

The Coast Guard is investigating whether a ship's anchor might have snagged and bent the pipeline owned by Amplify that shuttles crude from the offshore platforms to a facility on shore in Long Beach. A slit in the pipeline occurred about 5 miles offshore at a depth of about 98 feet, investigators said.

Officials have been cleaning up the spill by skimming oil off the surface of the ocean, erecting protective booms to keep crude out of sensitive wetland areas and dispatching workers to collect blobs of oil on beaches. So far, they have collected 5,544 gallons of crude, according to the Unified Command, which includes federal and state officials and Amplify.

But many say the miles-wide area of oily sheen on the water's surface off the Orange County coast doesn't reveal the spill's size as crude oil may remain beneath. "That is just a hint as to what the volume was," Pettit said. "Most of the stuff is below the surface and looking at the sheen doesn't tell you how deep this stuff is."

Sarah Bedolfe, a marine scientist with ocean advocacy group Oceana, said those responsible for oil spills are on the hook for damages, so early spill estimates tend to be lower than final amounts.

"The industry has a long, documented history of a deficient safety culture and the delays in reporting this spill suggest nothing has changed," she said.