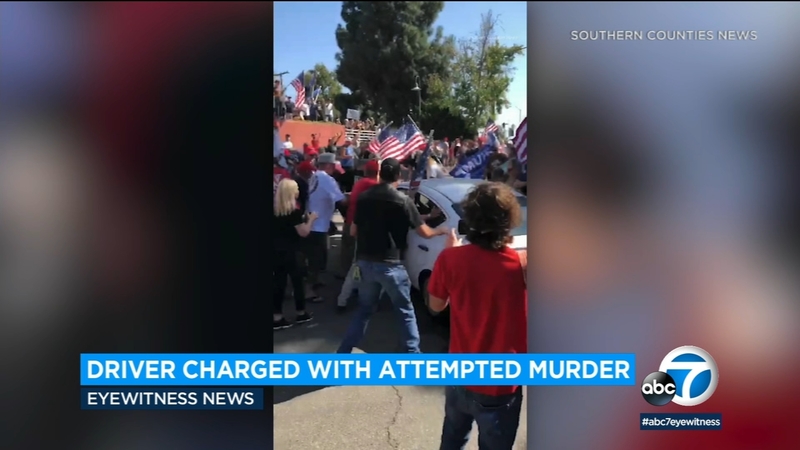 YORBA LINDA, Calif. (KABC) -- A woman accused of driving into a crowd of counterprotesters in Yorba Linda has been charged with attempted murder.

Turner was arrested Saturday after her car plowed into a crowd.

The Orange County District Attorney's Office says Turner was an organizer with an event called the March 4 Equality. The event, led by a group called Caravan 4 Justice, involved members of Black Lives Matter and other activists.

A group of counter-protesters who support President Donald Trump also showed up in the area at the same time.

At some point the two groups met and confrontations occurred.

The DA's office says Turner pepper-sprayed two counterprotesters as the two groups converged and then waved a wooden baton at them before getting into her car and driving through the crowd, "running over the head of one woman and breaking the leg of a man," the DA's statement said.

"The Orange County District Attorney's Office will not tolerate these professional militant organizers who are armed with weapons and teaching defensive tactics to counter police efforts to curb violence," said Orange County District Attorney Todd Spitzer. "We support the right to peacefully protest, but these are not peaceful protests. These are organized protests that encourage others to engage in civil disobedience. When pepper spray and other displays of force failed, she positioned her vehicle to be used as a backup weapon and she used that vehicle as a deadly weapon, willing to injure and kill those who stood in her way."

She fled and was stopped and arrested a short time later.