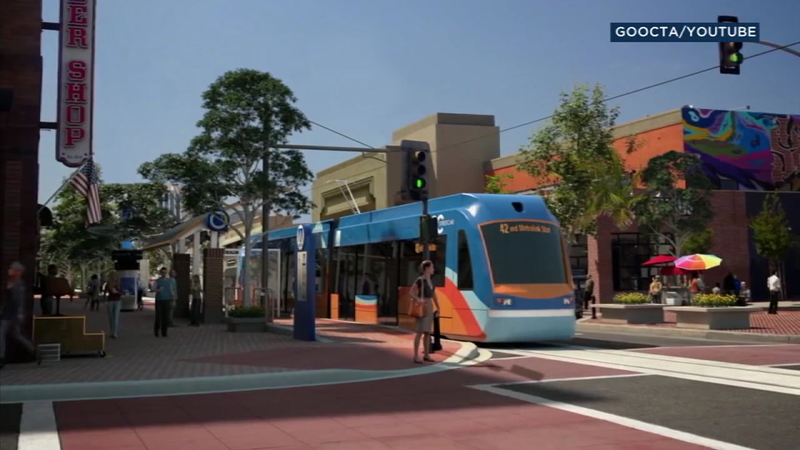 SANTA ANA, Calif. (KABC) -- A simulation showed off the OC Streetcar - the light rail project that's the first of its kind in Orange County.

"We're going to be able to have the ability to move people electrically," Santa Ana Mayor Miguel Pulido said.

It stretches just over 4 miles and the streetcar will make 10 stops, traveling from the Santa Ana Regional Transportation Center along Santa Ana Boulevard and Fourth Street to Harbor Boulevard in Garden Grove.

"We have a lot of activity of people coming in on Metrolink and Amtrak from San Diego, from Los Angeles and from the Inland Empire. This will allow people to have that last mile connection from the Santa Ana train station into the employment centers and the civic center," said Darrell E. Johnson, CEO of OCTA.

Officials expect about 7,300 daily riders. The OCTA said the cost to ride a streetcar will be about the same as a bus - about $2 per trip.

Many people said they'd try it.

"Sometimes people that don't even have a car, or their car broke down, if it's going to get you to point B, yeah I would use it," Frankie Cruz said.

But other said they'd pass.

"It would be kind of busy and packed, so I wouldn't ride it," one woman said.

Officials said there will be eight streetcars, with each one holding just over 180 people. But some businesses are concerned about losing parking spots on an already congested Fourth Street.

The project has taken years - with the total cost coming to about $400 million. Officials said 40 percent is paid with local Measure M sales tax. The rest from federal and state funds.