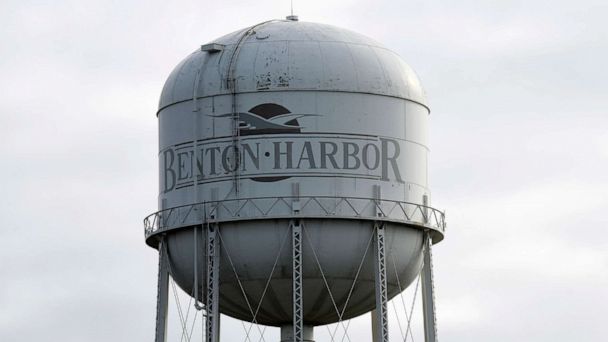 The directive comes a week after officials urged locals in Benton Harbor, a city of 9,600 people, to use bottled water for drinking, cooking and brushing teeth due to elevated levels of lead in water testing.


"For six consecutive sampling periods over the last three years, the Benton Harbor water system has failed to meet the regulatory standard for lead," the governor said in the directive.

Advocates in the city had filed an emergency petition to the Environmental Protection Agency (EPA) on Sept. 9 demanding a federal intervention to aid in the crisis.

In the directive, the governor announced she'll expedite lead service line replacements to be completed in 18 months, up from the prior five-year timeline. The effort will also continue to give free bottled water to Benton Harbor residents and free or low-cost drinking water testing and health services.

The Michigan Department of Health and Human Services has received U.S. Department of Agriculture Food and Nutrition Service (USDA) approval to provide Benton Harbor residents specific baby formula that does not require the mixing of water.

The effort will be funded by federal, state and local resources, with additional federal funding expected through the infrastructure bill currently moving through Congress. Under Michigan's 2022 state budget, $10 million is dedicated to replace service lines in Benton Harbor.


"I cannot imagine the stress that moms and dads in Benton Harbor are under as they emerge from a pandemic, work hard to put food on the table, pay the bills, and face a threat to the health of their children," Whitmer said in a statement."Wewill not rest until the job is done and every parent feels confident to give theirkid a glass of water knowing that it is safe."

Rev. Edward Pinkney, a local activist and president of the grassroots Benton Harbor Community Water Council, touted the directive as a victory.

"Without the petition, none of this could have happened. I am more than happy that Whitmer is now taking this a little bit more seriously," he told ABC News. "But, I want her to tell the people that the water is unsafe to drink rather than saying this is out of 'an abundance of caution.'"

Benton Harbor sources its water from Lake Michigan. Elevated lead levels in water has been an issue for several years in the city, where 85% of the population is Black, 5% Hispanic and about 45% have an income below the federal poverty line, according to the U.S. Census.

Lead can enter drinking water when plumbing materials and service lines contain lead corrosion. Lead exposure harms brain development in children and it causes both short and long-term health problems for adults, according to the U.S. Centers for Disease Control and Prevention.


The EPA has a lead contamination action level of 15 parts per billion. If water samples hit that mark, officials are supposed to take several actions to educate the public and restore water to a safe level.

In Benton Harbor, water testing surpassed that level in 2018. One home in 2020 tested at 440 ppb for lead. Eleven homes tested this year showed water with lead levels above 15 ppb, with one home hitting 889 ppb -- nearly 60 times the EPA's action level, according to data released by the city.