Meanwhile, the FBI has since joined the case to help determine the cause of the rupture, ABC News confirmed.
AP 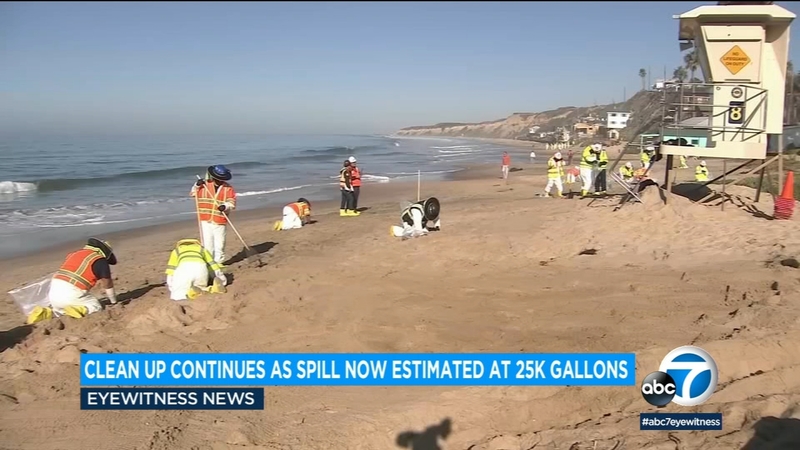 HUNTINGTON BEACH, Calif. -- The amount of crude oil spilled in an offshore pipeline leak in Southern California is believed to be close to 25,000 gallons, or only about one-fifth of what officials initially feared, a Coast Guard official said Thursday.

The leak off the coast of Orange County was previously estimated to be at least 25,000 gallons (94,635 liters) and no more than 132,000 gallons (499,674 liters). The final count for the spill will likely be closer to the lower figure, which correlates with the amount of oiling seen on the California shore, Coast Guard Capt. Rebecca Ore said Thursday.

"We have a high degree of confidence that the spill amount is approximately 588 barrels," she told reporters in Newport Beach. "That number may potentially adjust a small degree."

The spill off Huntington Beach was confirmed on Oct. 2, a day after residents reported a petroleum smell in the area.

Coast Guard officials said it came from a leak in a pipeline owned by Houston-based Amplify Energy that shuttles crude from offshore platforms to the coast. Officials said the cause of the leak remains under investigation but the pipeline was likely damaged by a ship's anchor several months to a year before it ruptured.

Meanwhile, the FBI has since joined the case to help determine the cause of the rupture, ABC News confirmed.

Orange County oil spill: Pipeline may have been displaced a year ago
EMBED More News Videos

OC OIL SPILL: The Coast Guard says the original displacing of the underwater pipeline that ruptured and spilled thousands of gallons of oil off the coast may have occurred as long as a year ago.

The shorelines in Huntington Beach, which is known as "Surf City USA," and neighboring Newport Beach were shut down until Monday.

Fishing also has been barred off the coast of Orange County. State officials are taking samples of fish from the area to assess whether they've been affected by the oil before allowing fishing to resume.

Workers in protective gear continue to comb the sand for tar balls washing ashore along more than 70 miles (113 kilometers) of coastline in Orange and San Diego counties. Roy Kim, an environmental scientist with California's Office of Spill Prevention and Response, said the size of tar balls being collected on beaches has diminished from the early days after the spill.

"They were seeing huge patties of oil in the beginning," Kim said, adding that the oil slick has largely been broken up into tar balls by the tides and winds. "Now you're just kind of seeing the smaller stuff."

Crews are also working to remove oil from rocky coastal habitat while being careful not to damage it, he said.

Some oil is naturally present off the coast of Southern California and residents are used to seeing some tar on beaches, said California Fish and Wildlife Lt. Christian Corbo. Tar samples collected in the clean up will be sent to a state petroleum chemistry lab to determine whether they're from the spill, he said.

In the coming days, workers will likely start assessing beach conditions in specific areas to determine whether the clean-up is complete, Ore said.

While it's still possible tar balls will wash up from the spill after that point - and officials will continue to respond to reports that come in - "at some point, and we're evaluating this right now, we reach a point where we recommend no further treatment on segments of the beach," she said.