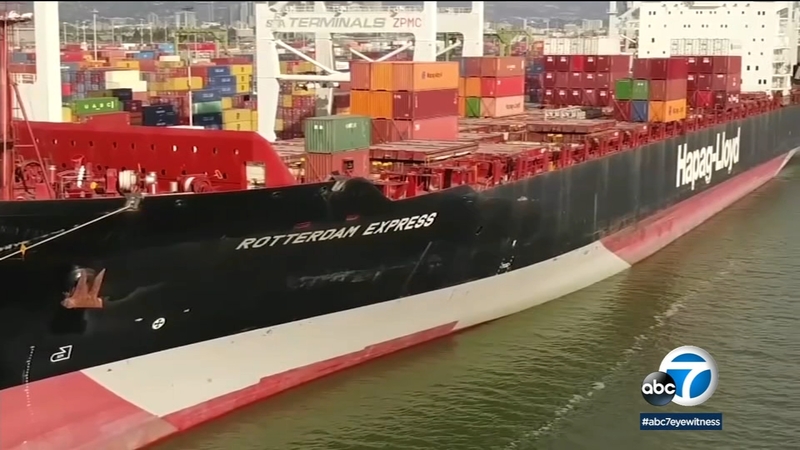 HUNTINGTON BEACH, Calif. -- Coast Guard investigators boarded a massive cargo ship as they probe what caused the rupture of an offshore oil pipeline that sent crude washing up on Orange County beaches.

The visit to the Rotterdam Express container ship came as investigators try to determine whether an anchor snagged, dragged and bent the pipeline owned by Amplify Energy, a Houston-based company that operates three offshore oil platforms south of Los Angeles.

The Associated Press reported Wednesday that the Rotterdam Express appeared to make a series of unusual movements while anchored in the closest spot to where the break in the pipeline happened, according to data collected by a marine navigation service. AP reviewed more than two weeks of data from MarineTraffic, which tracks radio signals from transponders that broadcast the locations of ships and large boats every few minutes.

But in an email Thursday, MarineTraffic spokesperson Fotini Tseroni said the movements indicated for the Rotterdam Express apparently were erroneous and may have resulted from errors involving the ship's GPS system. The company said it was removing the jumps in position to show the ship stayed within its anchorage.

The Rotterdam Express, a German-flagged ship nearly 1,000 feet (305 meters) long, was assigned to anchorage SF-3, the closest designated parking spot for ships to where the pipeline ruptured off Huntington Beach.

Hapag-Lloyd, the shipping company that operates the Rotterdam Express, confirmed Thursday that investigators boarded the ship Wednesday while it was docked at the Port of Oakland in San Francisco Bay. The company has said the ship played no role in the oil spill.

"We are fully cooperating with the authorities at this moment," said Nils Haupt, a spokesman at Hapag-Lloyd's headquarters in Hamburg, Germany. He said the ship remained in place while anchored.

"We have proof by the logbook, which is updated hourly, that the vessel did not move," Haupt said. "MarineTraffic in this case is wrong and the position is indeed incorrect."

A U.S. official told the AP that the Rotterdam Express has become a focus of the spill investigation. The official cautioned that the ship is only one lead being pursued in the investigation, which is in its early stages.

The investigators are seeking to collect tracking and navigational information from the vessel that could help them identify its exact movements, the official said. They are also seeking preliminary interviews with at least some crew members.

The official could not discuss the investigation publicly and spoke to the AP on condition of anonymity.

Petty Officer Steve Strohmaier, a Coast Guard spokesperson, declined to comment on the Rotterdam Express Wednesday but said the agency is analyzing electric charting systems from its vessel traffic service to see what ships were anchored or moving over the spill area.

The MarineTraffic data reviewed by AP showed the Rotterdam Express arrived outside the Port of Long Beach early on Sept. 22 and dropped anchor about 2,000 feet (610 meters) from the pipeline. It then showed the ship's position changing dramatically on three occasions in the following days, making it appear the ship had drifted over the pipeline.

The ship's location data, which works through a global network called the Automatic Identification System, is supposed to be accurate and reliable within a few feet, said NikolasXiros, a professor of marine engineering at the University of New Orleans. He said it would be very unusual for a vessel's reported position to be off by thousands of feet.

"GPS errors, even though they can happen, they scarcely if ever are of such magnitude, even when the carrier is moving," said Xiros, who noted that the Rotterdam Express was at anchor when the erroneous readings apparently occurred. "So, even though anything is possible, it is highly unlikely to observe such anomalies repeatedly on a marine navigation GPS receiver when the vessel is anchored close to shore and on a clear day."

AP sent an email Wednesday to the Unified Command Joint InformationCenter for state and federal agencies responding to the oil spill, seeking comment about the movements made by the Rotterdam Express prior to the spill. Senior Chief Petty Officer Lauren Jorgensen said the command was unable to discuss matters involving an ongoing investigation.

The first report of oil in the water near the pipeline were made the evening of Friday, Oct. 1. Amplify said the pipeline was shut down early Saturday morning but has not said how long it believes oil flowed from it.

Amplify's CEO Martyn Willsher said Tuesday divers determined a 4,000-foot (1,219-meter) section of the pipeline was dislodged 105 feet (32 meters), bent back like the string on a bow. Oil escaped through a slender crack.

If a ship's anchor were to become entangled with an underwater obstacle such as a communications cable or petroleum pipeline, the operator is required by federal law to notify the Coast Guard. The locations and movements of ships are also regularly monitored by both the AIS system and radar, according to the Coast Guard. Ships at sea also use AIS to avoid collisions with one another at night or during conditions with low visibility.

According to MarineTraffic data, the Rotterdam Express steamed out of San Francisco Bay on Thursday morning. According to a ship schedule posted in the Hapag-Lloyd website, it had been set to make port calls later this week in Seattle and Vancouver. Instead, the ship turned south, bound for Manzanillo, Mexico.
Report a correction or typo
Related topics:
environmentdisasteru.s. & worldcaliforniaoil spill
Copyright © 2021 by The Associated Press. All Rights Reserved.
TOP STORIES
Strike dodged with deal between film and TV crews, studios
Dodgers say Knebel, not Scherzer, will start Game 1 of NLCS
Robert Durst hospitalized with COVID-19, his lawyer says
MacArthur Park temporarily closes for cleanup, renovations
Bill Clinton expected to be released from OC hospital soon: Doctors
Masks and vaccines are a must this holiday season, CDC says
Woman offering $600 reward after car was stolen with dog inside
Show More
8th grader wears sign denouncing Christopher Columbus to school
Carson residents say foul odor in the air is making them sick
Hot, dry, windy: Red flag warning in effect for LA, Ventura counties
Here are the systems in place to prevent mix-ups of vaccine shots
Gunman shoots 3 Texas deputies from behind, killing one: police
More TOP STORIES News