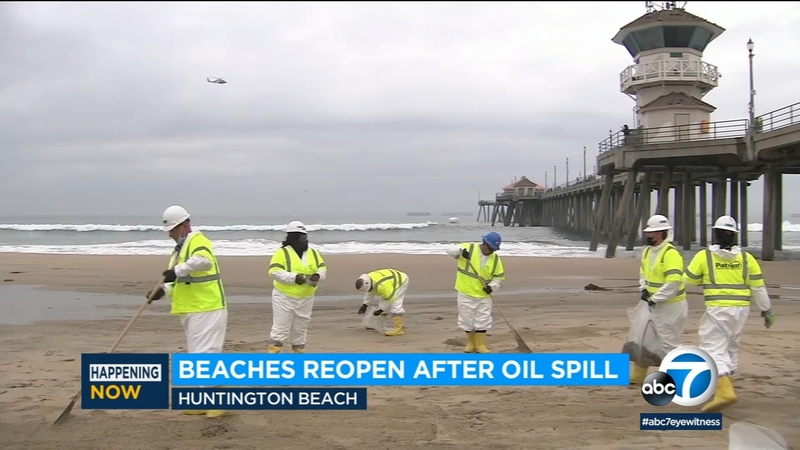 HUNTINGTON BEACH, Calif. (KABC) -- City and state beaches in Huntington Beach reopened to the public Monday morning, more than a week after a pipeline rupture sent oil and tarballs washing up onto the Orange County shoreline.

The beaches were cleared to reopen as of 6 a.m. "after coastal ocean and wetlands water quality testing results showed non-detectable amounts of oil associated toxins in our ocean water," officials said

The city of Huntington Beach says it hired an independent contractor to perform water-quality testing of the ocean and wetlands. The contractor tested 40 different sites and did not find significant levels of key contaminants associated with oil in the water.

"The health and safety of our residents and visitors is of the utmost importance. We understand the significance our beaches have on tourism, our economy, and our overall livelihood here in Huntington Beach," said Huntington Beach Mayor, Kim Carr. "It is important that our decision to reopen our shoreline and water be based on data and that we continue to monitor the water quality going forward."

The reopening is happening earlier than some had feared. At one point it was thought Huntington Beach - also known as Surf City USA - could be closed to surfers and swimmers for months. Just last week, Carr's optimistic estimate was that water access would be reopened in weeks.

Despite the reopening, an ongoing advisory notice remains in effect for all city beaches. Officials are still expecting to see oiled materials and tar balls wash up on the sand.

Beachgoers who smell any oil are advised to avoid that particular area.

Cleanup efforts led by the Coast Guard and involving local, state and federal agencies and wildlife groups continue along the Orange County coast.

Authorities have estimated that from 25,000 to 132,000 gallons spilled into the ocean from the ruptured pipeline owned by Houston-based Amplify Energy Corp. The cause remains under investigation, but one scenario involves the possibility that a large ship's anchor dragged along the ocean floor and struck the pipeline, breaking it open.

Orange County oil spill: Pipeline may have been displaced a year ago
EMBED More News Videos

OC OIL SPILL: The Coast Guard says the original displacing of the underwater pipeline that ruptured and spilled thousands of gallons of oil off the coast may have occurred as long as a year ago.

As of Sunday morning, more than 5,500 gallons of oil had been recovered, along with 13.6 barrels of tar balls and 250,000 pounds of oily debris. More than 1,600 people are involved in response operations.

Wildlife groups have also reported several dead birds as well as others that were coated in oil and were being treated.

Other beaches along the Orange County coast remained closed. Some, including those in Laguna Beach and Newport Beach, have a soft closure, meaning people can go on the sand, but not into the water.

Meanwhile, Sen. Alex Padilla and State Attorney General Rob Bonta will be in Orange County Monday afternoon for a tour and briefing on the emergency response to the spill.