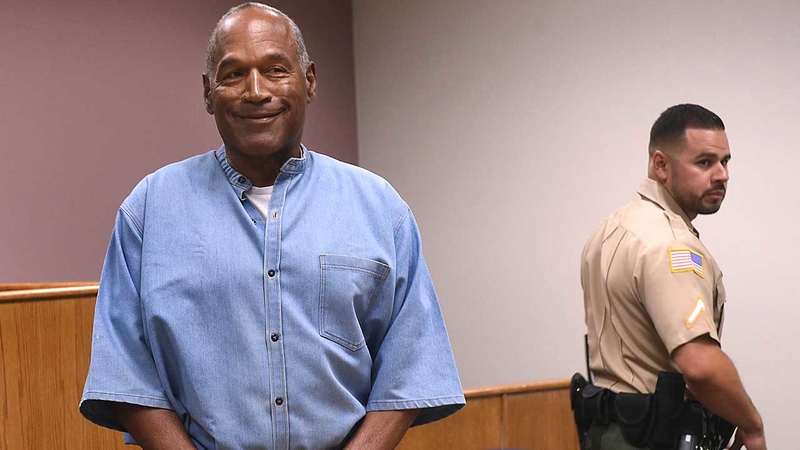 A Nevada parole board decided that the 70-year-old former football star will be released as early as Oct. 1 after serving his minimum term for armed robbery and assault with a weapon.

MORE: What we know about OJ Simpson's life going forward

The hearing was held via teleconference with four parole board members in Carson City, which is about 100 miles away from Lovelock. He has been held there since he was convicted in 2008.

The conviction came 13 years to the day after he was acquitted of murder in 1995 in the deaths of his ex-wife Nicole Brown Simpson and her friend Ronald Goldman in Los Angeles.

In September 2007, Simpson and a group of men, two of them armed, burst into a hotel room at the Palace Station in Vegas in order to retrieve sports memorabilia items he believed had been stolen from him.

During his hearing, Simpson described the circumstances leading up to the confrontation in the hotel room. He said he and the other men did not break into the room and were allowed to come in.

He also reiterated that he was only trying to retrieve sports memorabilia that belonged to him, and that he did not mean to hurt anyone. Simpson said he never pointed a gun at anyone or made any threats during the crime, just that he forcefully insisted that the memorabilia belonged to him.

"In no way, shape or form did I wish them any harm," he said.

Simpson said he has also led a "conflict-free life," while in prison and even took an "alternative to violence" course.

His daughter, 48-year-old Arnelle Simpson, spoke at the hearing and urged the board to grant her father parole because he is remorseful.

"He's my best friend, my rock...we recognize that he's not the perfect man," she said. "We just want him to come home...this has been hard. This has been really, truly hard. There is no right or wrong way to explain how to handle this."

She added that she and her family know Simpson "could have handled the situation differently" when it came to retrieving his memorabilia.

His attorney Malcolm LaVergne spoke at the hearing and read a letter to the board, estimating it to have been written within the last nine months. In the letter, Simpson congratulated Las Vegas Assemblyman Ozzie Fumo for his new position as a state legislator.

LaVergne then argued to the board that Simpson's letter didn't ask for special treatment or an early release, but instead showed how Simpson wants to help other inmates have "a better life."

Bruce Fromong, one of the robbed memorabilia dealers and a victim in the case, came to Simpson's defense at the hearing.

Bruce Fromong, victim in O.J. Simpson's robbery: "If he called me tomorrow and said..."Will you pick me up?" Juice, I'll be here tomorrow." pic.twitter.com/3mG5V9f6du

Fromong admitted the hotel room did contain items that belong to Simpson, but said that on the day of the robbery, "Simpson was misguided."

To make their decision, the parole board members considered Simpson's conduct in prison, participation in prison programs, a potential letter of support and an assessment of the risk of re-offending.


He got the four votes he needed from the parole commissioners. In agreeing to release him, they cited his lack of a prior conviction, the low risk he might commit another crime, his community support and his release plans.

Simpson said if released he plans to return to Florida, where he was living before his incarceration.

"I could easily stay in Nevada, but I don't think you guys want me here," he joked at one point.

"No comment, sir," one of the parole board members said.

Simpson, an electrifying running back dubbed "The Juice," won the Heisman Trophy as the nation's best college football player in 1968 and went on to become one of the NFL's all-time greats.

The handsome and charismatic athlete was also a "Monday Night Football" commentator, sprinted through airports in Hertz rental-car commercials and built a Hollywood career with roles in the "Naked Gun" comedies and other movies.

All of that came crashing down with his arrest in the 1994 slayings and his trial, a gavel-to-gavel live-TV sensation that transfixed viewers with its testimony about the bloody glove that didn't fit and stirred furious debate over racist police, celebrity justice and cameras in the courtroom.

Last year, the case proved to be compelling TV all over again with the ESPN documentary "O.J.: Made in America" and the award-winning FX miniseries "The People v. O.J. Simpson: American Crime Story."

In 1997, Simpson was found liable in civil court for the two killings and ordered to pay $33.5 million to survivors, including his children and the Goldman family.