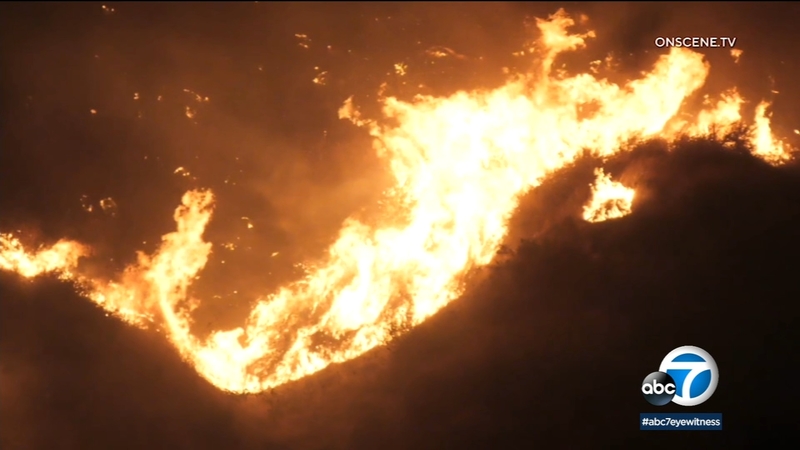 The fire, dubbed the Old Water Fire, started near Old Waterman Canyon Road and Highway 18, according to San Bernardino County Fire. By Friday morning, officials said the fire burned 145 acres and was 55% contained.

Structure protection was in place by crews as mandatory evacuation orders were ordered for Arrowhead Road and a portion of north San Bernardino near Mariposa Drive and David Way, according to San Bernardino National Forest officials. About 80 homes were affected by the initial evacuation.

"We got woken up at 2 a.m. and got told we were possibly going to have to evacuate," said Jessica Fischer. "I'm nervous. I'm not used to this situation, it's a little concerning. My family is still up there. They haven't left the house yet, so I'm waiting for them to come up the hill."

An evacuation center was set up at San Gorgonio High School at 2299 Pacific Street.

Voluntary evacuations were lifted by noon Thursday, but Highway 18 remained closed until 6 p.m. and mandatory evacuations in other areas remained in place. Around 8 p.m., evacuation areas reopened to residents with proper identification only.

#OldWaterFire - Effective 8:00pm, all EVACUATION areas will re-open to RESIDENTS ONLY with proper ID. Firefighters and law enforcement will continue to work in the area throughout the night. Please exercise caution when returning. RedFlagWarning conditions still exist. ^eas

Officials said around 4 a.m. Thursday, the moved southward and to the northeast in the Coldwater Canyon area and "had potential for large growth" as Santa Ana winds intensify.

It was not immediately known how the fire started. California Highway Patrol officers responded to the area following reports of possible fireworks or a type of explosion, but officials said the cause remained under investigation.

The blaze was burning approximately five miles from the Cal State San Bernardino campus, which is closed Thursday.

Firefighters were on scene as early as 2:20 a.m. battling the blaze, which officials said was burning at rapid rate of spread. San Bernardino firefighters had two bulldozers, hand crews, four engines and two chief officers respond to the scene.

#OldWaterFire(Update):Voluntary evacuations have been lifted, fire remains at 75 acres with 30% containment.Hwy 18 remains closed up to the 138,with red flag warning remains in effect. #SBCoFD remains in unified command with @SanBernardinoNF and @SanBernardinoPD. pic.twitter.com/g5jILduBEc

A portion of Highway 18, between 40th Street in San Bernardino and Highway 138 in Crestline, was closed.