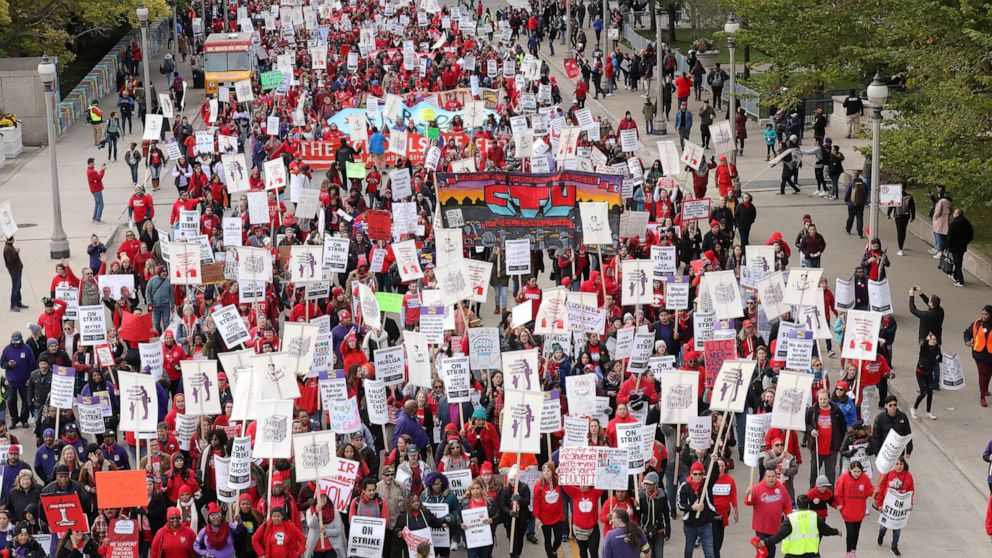 Chicago Public School teachers took to the streets for the second day of their strike on Friday.

Negotiations between teachers and the city's school district are still underway, and while there appeared to be some progress, the Chicago Teachers Union (CTU) said they're not close to reaching a deal.

"They're talking about class size. [Chicago Public Schools] is offering some discussion and that's a first," Chris Geovanis, spokeswoman for CTU, told ABC News Friday. "It's very inadequate but it's a start."

Classes in the nation's third largest school district were canceled Thursday and Friday due to the strike.

Chicago Public Schools (CPS) submitted a written proposal on reducing class size after all-day negotiations Thursday, according to ABC Chicago station WLS-TV. The details of the proposal were not immediately clear and CPS did not respond to ABC News' request for comment.

The union said despite "some progress," some issues have not been discussed. Others issues, such as staffing shortages, have been discussed but not put "in writing in an enforceable contract," according to CTU.

"Bilingual education services are chronically short of both educators and resources," the union said in a statement.

More than 300,000 students were enrolled in the city's public school system in the 2018-2019 school year. Almost half are Latino, according to CTU.

Teachers are also pushing for more school nurses, as most schools have only one nurse one day a week.

CPS said their written offer would provide a nurse in every school by 2024 and double the social workers in schools.

"Teachers and staff are invaluable to our schools, and our offers recognize that," according to a statement from Mayor Lori Lightfoot, CEO of CPS Janice Jackson and Chief Education Officer of CPS LaTanya McDade. "Although we wish we could offer more to our teachers and support staff for their hard work and dedication, we believe our offers are fair deals that meet the needs of teachers, paraprofessionals and students, and keep the district on a path of success."

Geovanis said it was hard to say if the strike would continue into Monday. She noted that CTU and CPS would be negotiating this weekend.