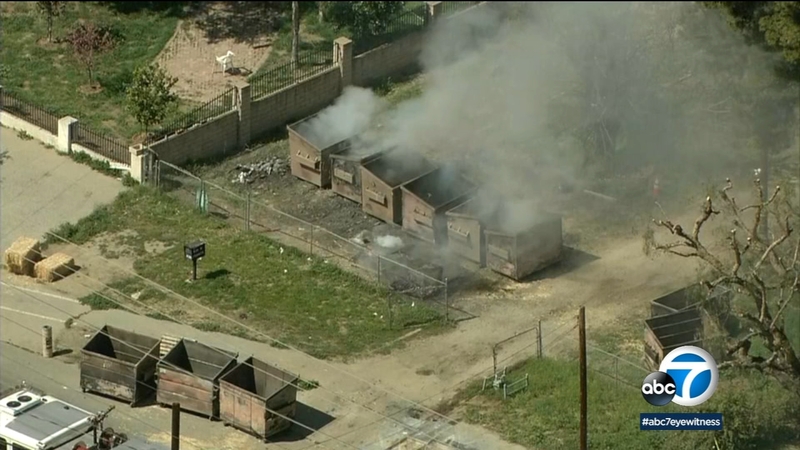 ONTARIO, Calif. (KABC) -- Some families remained displaced Friday as authorities continued to destroy a massive cache of fireworks in an Ontario neighborhood rocked earlier this week by explosions that left two people dead.

Ontario officials Friday evening announced a portion of the mandatory evacuations issued were downgraded to voluntary, allowing some residents to return home.

Effective March 19 at 5 PM, the mandatory evacuation order has been lifted for the following green zones listed in the map. For more information, visit https://t.co/RkEKHRXDac.
Affected residents may contact the City of Ontario Public Information Hotline at (909) 395-2970. pic.twitter.com/fAqgHkjYRx

Fire Chief Ray Gayk said small controlled burns still need to be conducted, and the Environmental Protection Agency will start helping in the cleanup and removal of debris. The work to completely clear the area will continue over the next couple of days.

Tuesday's blasts rained down debris -- including ammunition and large nails -- over 80 properties in Ontario, and dozens of residents were evacuated. Fireworks are illegal in Ontario, as in many California cities, and investigators are trying to figure out why the explosives were there.

Authorities said five homes suffered major damage and 36 had minor damage. In total, the damage is estimated at just over $3 million.

Cousins Alex Paez, 38, and Cesar Paez, 20, were reported missing after the explosion. Their family says they are the two people who were killed, according to a GoFundMe page, although authorities have not yet officially confirmed the victims' identities.

Officials on Thursday said experts have burned about 80 bins, each holding about 27 gallons, full of fireworks to safely destroy them. Bomb technicians have collected 140 27-gallon buckets of illegal fireworks, according to investigators.

Gayk said he expects that another 80 bins will be burned Friday. The controlled burns began Wednesday evening, and the city of Ontario tweeted that they would continue until all hazardous materials are destroyed.

Some residents who were evacuated from the area following the blasts were able to return to their homes to collect belongings.

"Pretty sure we're all mad at the fact that 'cause of them, all of us could have died, or could have gotten seriously hurt ," neighbor Emily Figueroa said. "It's sad that two of them did pass away 'cause of that, but I feel like they should've been more aware 'cause they had that there.

Authorities, including the FBI, are investigating where the huge stash of fireworks came from. Officials said the fireworks do not appear to be commercial-grade products, as they initially thought. Investigators are trying to track bar codes on the fireworks.

"We don't understand why all of the fireworks were there," Police Chief Mike Lorenz said.

'Indescribable:' Ontario mayor says he was nearby when deadly blast went off
EMBED More News Videos