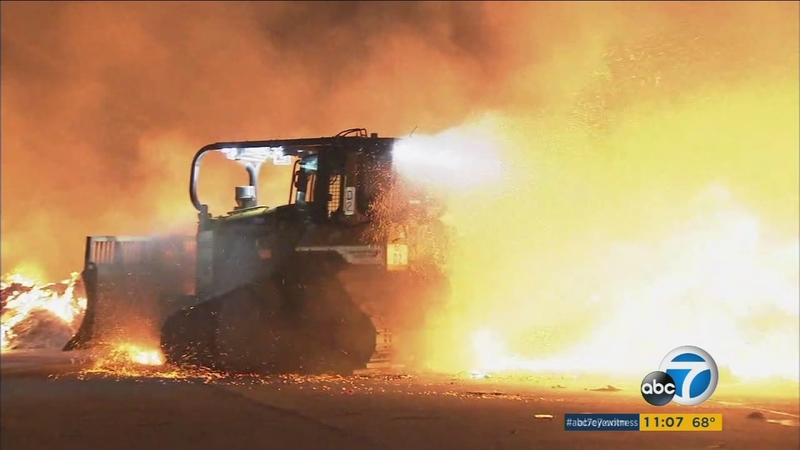 ONTARIO, Calif. (KABC) -- A massive fire at a recycling facility in Ontario sent large clouds of black smoke into the air Friday afternoon.

The fire broke out around 4:23 p.m. at a cardboard recycling facility near Holt Boulevard and N. Grove Avenue, according to Ontario Fire officials. The fire jumped nearby railroad tracks and set fire to some train track pieces and a fence in the backyard of one building, but firefighters were quick to control the flames.

#Breaking #Ontario fire here's a guy trying to put out the fire in his back fence. pic.twitter.com/Un91HKeLxq

Firefighters said pallet fires can be extremely difficult to battle because the way pallets are constructed keep heat inside, making it almost water-resistant. One firefighter said cities sometimes have to boost water pressure in order to get an upper hand in a pallet fire.

Fire officials said no other structures were threatened by the blaze, but firefighters were concerned that the winds could send sparks to other nearby buildings.

Authorities said no injuries were reported and the area was evacuated.

The large plumes of smoke could be seen in Los Angeles and Orange counties.

Several streets were blocked off and a Metrolink train was delayed because the blaze was so close to train tracks and firefighters needed access to get to the flames.

Update: RIV Line 404 to Riverside-Downtown is on the move & delayed up to 10 minutes due to fire department activity near the tracks.

The fire did not cause any delays at the Ontario Airport, located northwest of the facility.