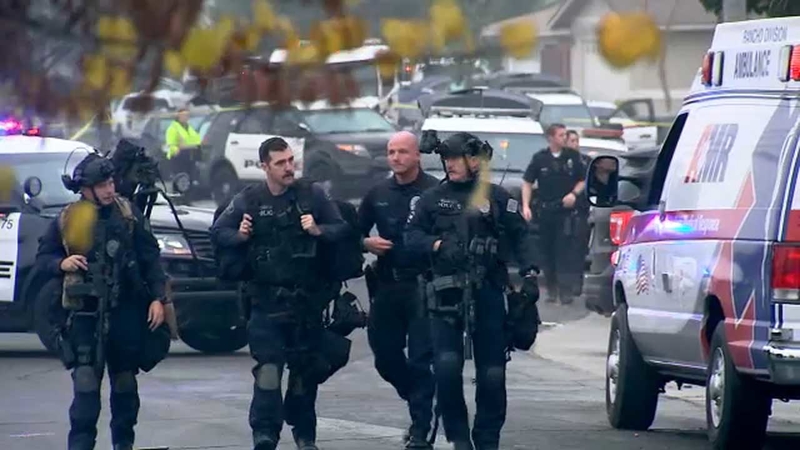 ONTARIO, Calif. (KABC) -- Two children and a woman identified as a San Bernardino County probation officer were found dead inside an Ontario home Saturday morning after police opened fire on the armed woman and she barricaded herself inside, authorities said.

The incident was preceded by officers responding to a 911 call at 2:30 a.m. and arriving at the home on the 1300 block of F Street to find the suspect's husband shot and critically wounded, authorities said.

The man was standing behind a screen door when two officers approached, said police Sgt. Bill Russell, and "as he was stepping out of the way an officer-involved shooting occurred in which the officers engaged in gunfire with a female inside the house."

Update: Ontario Police have made entry into the home and discovered the suspected female and two juveniles are deceased inside the residence. Investigators is on-going.

Authorities had initially said the police shooting occurred outside the home and that the woman exchanged gunfire with the officers. Russell later said it was unclear if she had in fact shot at police.

According to the Ontario Police Department, the woman barricaded herself inside the residence. The wounded man was rushed to a hospital with life-threatening injuries.

An hourslong standoff ensued, during which authorities attempted to make contact with the woman.

A SWAT team then entered the house and discovered the suspect and the "school age" children deceased. The children's deaths were "believed to be as a result of an act that occurred prior to our arrival," Russell said.

Whether the woman was killed by police gunfire or a self-inflicted gunshot wound was under investigation, the sergeant said.