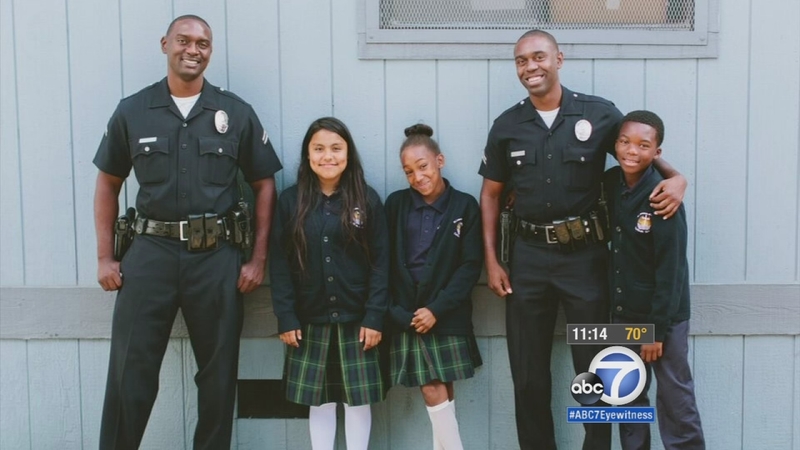 Gartland said the program was created by an Los Angeles police officer who was frustrated that kids in Watts didn't have enough opportunities.

Students can apply to begin the program in the 3rd grade. Those selected are given scholarships to attend the St. Lawrence of Brindisi School in Watts.

"There's no other organization in L.A., particularly Watts, that weaves the thread all the way through," said Theresa Gartland, the executive director of Operation Progress.

An individual LAPD officer checks up on the students school work and communicates with the kids' parents.

"The Operation Progress LAPD mentoring program is the highest form of community policing there is," said Gartland.

"When I was young, you'd do something that's awesome but nobody would ever come up to you and say, 'hey, you did a good job. I try to let them know, when they do something good, they're doing a great job!'" said Salcido.

Officer Salcido said it is changing perceptions for parents in the community.

"They see us and they tell us, 'hey, before this program came along, I didn't trust the police.'" said Salcido.

One of Salcido's mentees, Meryland Gonzalez, said it made her want to be an LAPD officer.

"I want to mentor kids too to become a better person!" said the 4th grader.

Robert Turner, an 8th grader, said changing schools removed him from gang violence he witnessed as an elementary school kid.

"At my old school, I seen plenty of fights. I see people's nose get broke, people bleeding," Turner said.

Turner is now involved with after school programs, including football.

"It helps me to really think about life and my goals for life," said Robinson.

The program is funded in large part by Rick Caruso, Steve Robinson, and Janet Crowne.

Many of the officers who help out are also coaches of the LAPD's Watts Bears team, which was recently profiled by Eyewitness News.

"It was actually my first time on an airplane, so it was very nerve-wracking!" said 11th grader Jennifer Alvarado. "It opened my eyes to the global community!"

Alvarado said the officers from Operation Progress have made her much more likely to attend college.

"I grew up without a father and I view most of them as father figures in my life," said Alvarado.