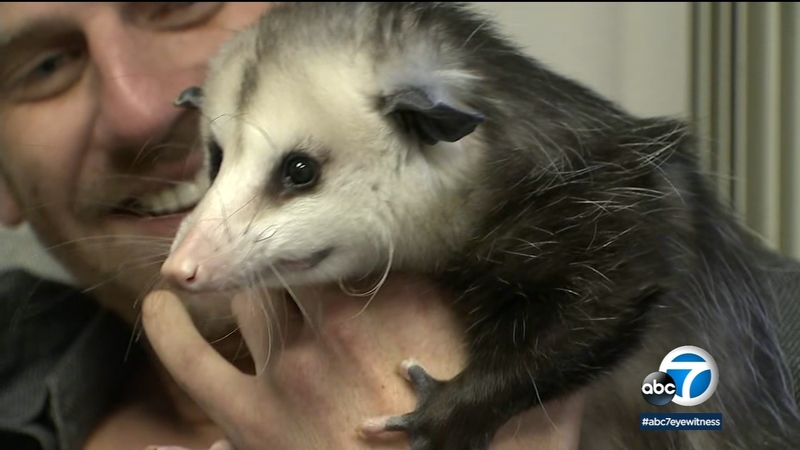 COSTA MESA, Calif. (KABC) -- A Costa Mesa man says he was kicked off his JetBlue return flight with his pet opossum after being allowed to fly out on the departing flight, leaving him stranded in Texas for several days.

It all played out on a recent flight from Texas to Long Beach.

Gerald Tautenhahn had flown out there with his pet Zatara, an 8-month-old opossum, where he was visiting his mother.

His dad had recently passed and he wanted his mom to meet Zatara to bring her some joy.

It was Zatara's first flight.

But when they tried to return to Long Beach, he says they were booted off the return flight, leaving them both stranded for several days.

Gerald posted photos and videos on Zatara's Instagram page, pleading for help to get back home.

He said he had checked with the airline before flying and was told it was OK to fly with his opossum.

"They said as long as she's in an approved pet carrier, if it's underneath the seat during takeoff then you're fine," he said.

Zatara was even a hit at the JetBlue counter in Long Beach, he says, where some people asked to pet her.

That's why the return flight was such a shock. He says they got through the security checkpoint just fine and had already boarded the plane when they were asked to leave.

"I was just frustrated," he said. "I asked her, you guys got me out here, at least let me fly back. It's not like I was trying to sneak her on in the first place. Everyone was well aware of what she was."

"It ticked me off pretty good because at no point in time did anyone confront me and say that's not a cat or a dog you can't fly with it."

Gerald says JetBlue suggested he should rent a car to get back to California. Instead, he found another airline - United - that would fly them and they're now back home in Costa Mesa.

He says he was not reimbursed for his return flight.

Eyewitness News reached out to JetBlue, which said in a statement the airline accepts dogs and cats in an approved pet carrier.

The airline added: "On the customer's return trip, our crewmembers in Austin witnessed the opossum come out of its carrier and saw that it was not a cat or dog."