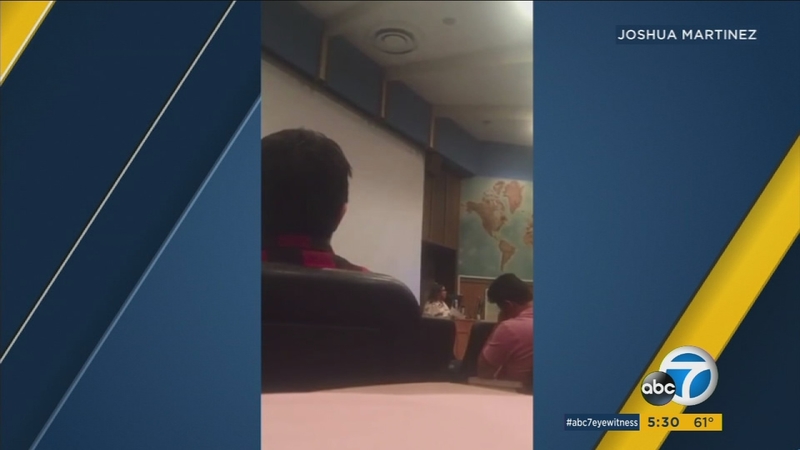 COSTA MESA, Calif. (KABC) -- One Orange Coast College professor, Olga Perez-Stable Cox, described the presidential election results to her students as an assault and an act of terrorism, as captured in a secretly recorded video.

The comments sparked complaints, including one from the college's Republican club.

The video was said to have been recorded in the instructor's human sexuality class about a week after the election.

"For a student to sit through that and having to hear that, the question of equitable treatment comes into play," said Orange Coast College Republican Club President Joshua Recalde-Martinez.

Though the professor's syllabus mentions dealing with sensitive topics that could conjure strong feelings, Recalde-Martinez stated the syllabus was in reference to sexuality and not politics.

"Those comments had no place in the classroom and it just was a leftist indoctrination on her part," Recalde-Martinez said.

The club that filed the complaint asked that professor to apologize and enroll in anger management.

"We take this very seriously. We're going through an investigation, looking into the matter," Orange Coast College board member Juan Gutierrez said. "We have a process in place and we want to be respectful of the rights of the students as well as the instructor and our staff and faculty."

Other students viewed the situation as ultimately unimportant.

"People are making a big deal out of this," student Angel Martinez shared.

Although the professor has not commented on the matter, the union she belongs to issued a statement in support.

"It is unfortunate, as well as disappointing, that some students in our college community choose to behave in a manner that undermines our long, American traditions of academic freedom and open classroom discussion," the statement read.

The union further stated it believes that any secret classroom recordings violate school and state codes.