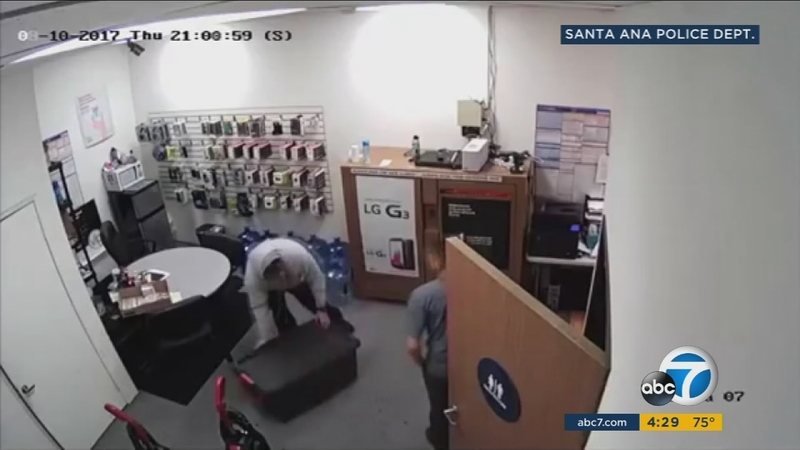 The suspect struck a store last Thursday, showing a gun and telling employees and customers to get in the back of the store.

"Take anything you want, you know, don't hurt us. Well I hear him taking the phones, filling up a tub," the clerk said.

One employee said the suspect went straight for the store's vault. Authorities said the man has hit two other Verizon stores since February - one in Garden Grove and one in Seal Beach.

Surveillance video from each store shows the suspect doing similar actions. He walks in with a large rolling box, shows a gun and knows exactly what he wants.

"He takes only phones, doesn't ask for money. He's only after the phones. That's the same in the three cases that we're aware of," Cpl. Anthony Bertagna said.

Authorities said the LAPD contacted them about a possible similar case. So far, no one has been injured during these crimes, but the man pointed the gun at a clerk in Garden Grove.

The clerk in Santa Ana said it happened to him, too.

"At this point, I thought I was going to get shot. It was that serious - the tone and the whole energy of it," the clerk said.

Police hope someone recognizes the man before things get violent.

"There's a lot of different things that could happen. So anytime you bring a gun into play, tragic events can happen, and we're trying to avoid that," Bertagna said.