OC pandemic: Angry residents speak out at Board of Supervisors meeting, demand that COVID closures be lifted 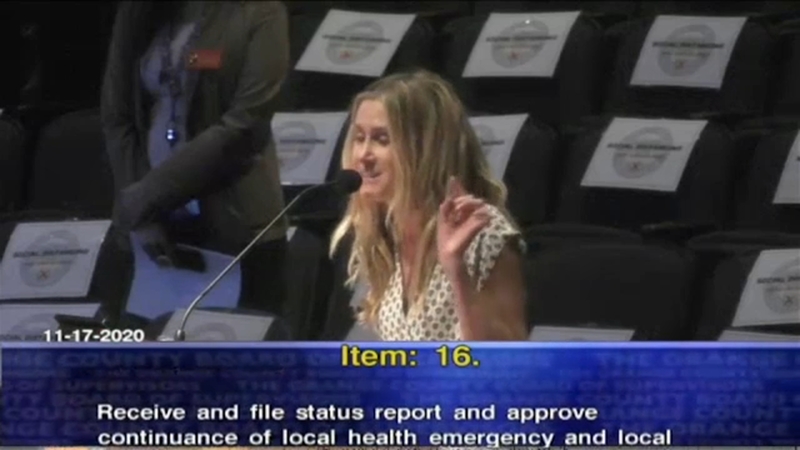 SANTA ANA, Calif. (KABC) -- Residents who were angry about Orange County's coronavirus restrictions spoke out at a Board of Supervisors meeting on Tuesday morning, after the county was among 40 in California that reverted back into the most restrictive purple tier of the state's four-tier reopening roadmap.

The supervisors' meeting agenda included a discussion of continuing their mitigation efforts and health emergency order.

"We the people, we're battered and bruised," a woman who identified herself only as Kimber P. of Laguna Niguel said, addressing the elected officials during the public comment portion of the meeting. "You have the almighty power to lift this fake state of emergency once again that you guys are putting us in."

New cases have risen sharply in the county, where health officials reported 380 new cases on Monday, raising the cumulative count to 65,605. There were no new fatalities, so the death toll stands at 1,526.

Nevertheless, residents and business owners at the meeting demanded that the county reopen.

Orange and Ventura counties moved back to the most restrictive tier in California's coronavirus reopening framework, the state announced Monday.

"I have a high-school senior who's on the verge of becoming a statistic because of the isolation," said another woman, her voice choked with emotion. "Please hear me. This is killing our children."

Although cases have risen sharply -- with more than 500 cases announced Friday and Saturday and more than 600 on Sunday -- deaths have been decreasing. Last week, the county reported 18 deaths, compared with 24 the week before.

But Orange County Supervisor Lisa Bartlett, the president of the California State Association of Counties, noted that deaths are a lagging indicator and as hospitalizations increase, eventually so do fatalities.

Michelle Steel, an outgoing county supervisor and congresswoman-elect, lashed out at Gov. Gavin Newsom on Monday after he announced that 40 counties were being moved back into the purple tier.

"Today's unilateral move by Governor Newsom is troubling and harmful to Orange County families who need to put food on the table, to small business struggling to stay open, and to the mental health of our community," she said.