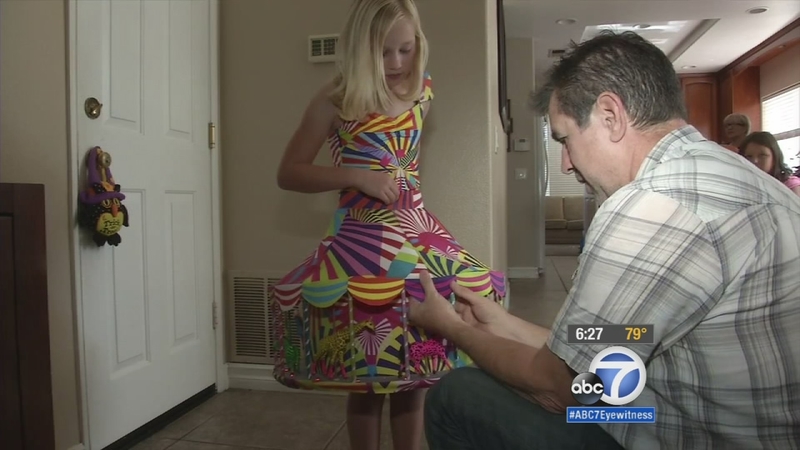 IRVINE, Calif. (KABC) -- If you see 8-year-old Isabella Sansevero out trick-or-treating this Halloween, you may try to figure out where you've seen her costume before.

That's because it's a near perfect replica of Katy Perry's carousel dress.

"I'm just blown away. It's so exciting," Isabella said.

Isabella's dad, Daryl Sansevero, partnered with local costume designer Giselle Becker to make the outfit. They spent more than $400 on the materials, and it took 60 hours of work.

"There's so much sewing in there, there's $30 worth of Velcro holding that thing together, LEDs, glitter paint," Sansevero said.

Making these elaborate costumes is something of a tradition for Isabella and her dad. It started in 2011 when she wanted to be a Google Android mascot. In 2012, she was a cupcake.

When she was 6, she donned a white dress covered in peppermints like Katy Perry wore on stage. Last year, her costume was an albino peacock, which included 300 LEDs.

Sansevero says he wants to show his daughter anything is possible.

"I don't like things conventional and boring and the same. I say go big, just go for it, go after your dreams," Sansevero said.

Like getting the attention of your idol. Sansevero is friends with Katy Perry's father, who sent the singer a photo of this year's costume.

"He texted it to Katy, and she said something along the lines of 'that's one of the coolest ones I've seen," Sansevero said.

"It made me feel like wow, she knows me now," Isabella said.

While the costume is getting a lot of attention, Sansevero is already thinking of ways to outdo himself next year.