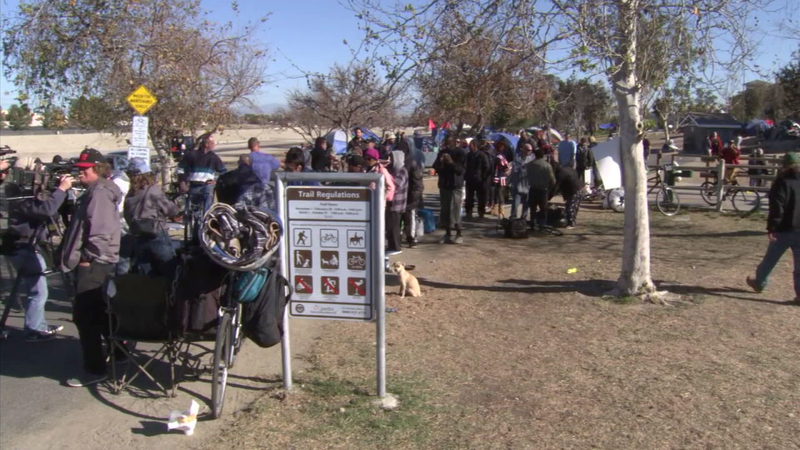 SANTA ANA, Calif. (KABC) -- Orange County officials began moving homeless people out of the Santa Ana riverbed and into shelters and motels on Tuesday. It's all part of a settlement worked out by the county and homeless advocates.

"We've been here for the last six months, trying to offer services. At some point there was going to be a day of reckoning," said Orange County Supervisor Todd Spitzer.

An Orange County judge got an up-close view of living conditions at a homeless encampment along the Santa Ana riverbed.

The decision comes after lawyers agreed the county would provide motel rooms for hundreds of evicted people for a minimum of 30 days, in addition to providing resources in hopes of keeping them off the street.

Carter issued a temporary restraining order last month after a lawsuit was filed on behalf of the homeless.

"I'm worried that people have been -- hundreds of people, I've watched them for the past three days -- standing in line, bags packed, ready to go. The county doesn't have the rooms," said Brooke Weitzman of the Elder Law and Disability Rights Center.

Weitzman said she's worried deputies will begin making arrests as people wait to get out.

The county said it's moved more than 230 people already and is securing more rooms.

While many are lined up in hopes of a voucher, there's mixed reactions about the decision.

"(It's) somewhere I could shave and shower and look for a job during the day, come back and have somewhere to sleep instead of coming out here and worry about getting robbed," said Raymon Hull, who lives on the river trail.

"What happens after that, though?" said Scott Davis, who also lives on the trail. "I don't like to take money from the government."