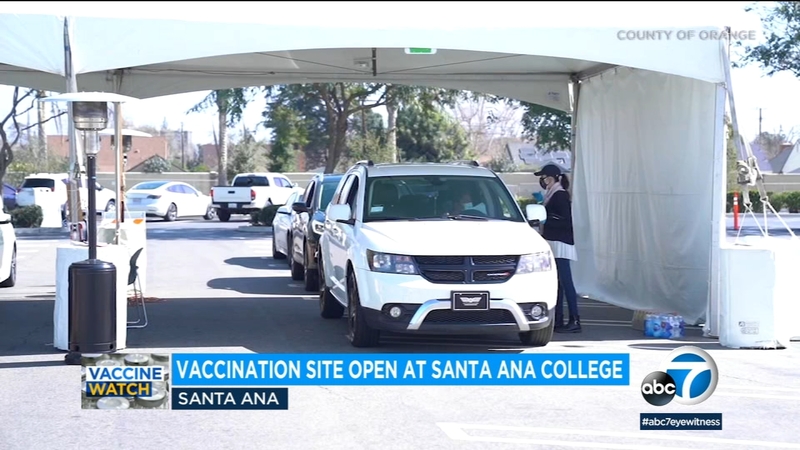 According to the county's public information manager, the point of dispensing -- also known as a POD -- was well on its way on opening day to meeting its daily goal of 1,000 shots.

Santa Ana has the largest number of confirmed COVID-19 cases in O.C., according to county data.

Santa Ana resident Jose Rodriguez told Eyewitness New in Spanish that he was relieved to see the POD was close to home.

Orange County is counting on its community partners to vaccinate Latino seniors most vulnerable to COVID-19 and address immunization disparities.

SAC's Interim President Dr. Marilyn Flores said administrators at the community college jumped at the opportunity to serve their community.

"It's the best thing you can do to bring the services to the community, and to meet some of those challenges where potentially individuals don't have access to the internet. They're able to come and walk up, make their appointment," Dr. Flores said.

Trust was also key in the selection of this site, according to Marvin Martinez, Rancho Santiago Community College District chancellor.

"This campus has been around 150 years. There's a comfort level people have in this community with this campus. They feel comfortable coming here getting their vaccine," Martinez said.

For Rodriguez, the challenge was getting an appointment through Othena.

The Santa Ana senior had to wait until the start of February to register on the county's online platform. That's when Othena was made available in Spanish, followed by versions in Vietnamese and Korean.

Then, Rodriguez said he had to be persistent to register. Three attempts later, he had an appointment.

For Rodriguez, the easy part was his motivation to get vaccinated. He told Eyewitness News he was mourning the deaths of three friends.

A wife serenaded her husband with a mariachi trio as he continues to battle against COVID-19 at an Orange County hospital.

According to data from the O.C. Health Care Agency, Hispanic residents over the age of 65, many of whom live in Santa Ana, are dying at a disproportionately high rate from COVID-19. They make up 29% of senior deaths -- a rate nearly twice the percentage of their population.

Meanwhile, white seniors make up 42% of deaths, but 60% of the senior population.

County Public Information Manager Molly Nichelson said local leaders have done their best to get a POD in Santa Ana.

"Santa Ana is a really highly urban area, so there's the trying to find a site that'd be large enough to accommodate. Santa Ana is a challenge," Nichelson said.

The district's chancellor said he expects the POD to be open through at least the fall.

Hours are Tuesday through Saturday from 8 a.m. to 5 p.m. An appointment is required.

For the first time in months, Orange County's COVID-19 positivity rate has improved enough to qualify for the red tier in the state's reopening framework, but improvements for other metrics are still needed.

As of Wednesday, the county continued focusing on immunizations for seniors over the age of 65 and healthcare workers in Phase 1A of the state's vaccine rollout.