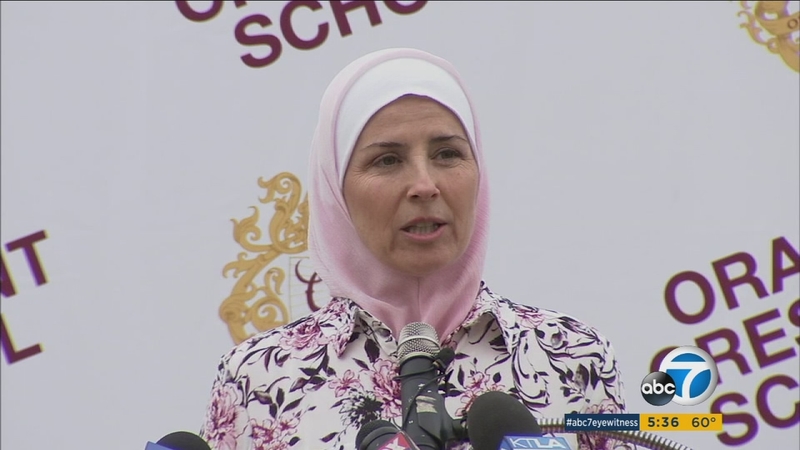 GARDEN GROVE, Calif. (KABC) -- A Garden Grove educator has turned an instance of religious intolerance and hate into a teachable moment.

Orange Crescent School started its day like any other school. The Boy Scouts raised the flag as they and the Girl Scouts led those assembled in a pledge of allegiance.

Just weeks ago, the Islamic faith-based school became a target for hate.

They, along with several local mosques, received a letter suggesting President-elect Donald Trump would "do to Muslims what Hitler did to the Jews."

"The letter was addressed to the "children of Satan," explained school principal Maisa Youssef. "I will refrain from reciting the rest due to its vulgarity."

Youseff chose not to shield her students from the message. Instead, she encouraged them to respond.

Student body president Afai Ali and 230 fellow students helped draft a letter to the author. It was delivered by their vice principal, Leila Dakelbab.

"We are just normal, all-American kids. We are proud to live in the best country in the world and practice our religion freely," Dakelbab read.

Students at the school not only addressed the letter, but they also invited Trump to visit their school.

"We stand by your message of uniting the country, and we too want to make America a better place," the letter read.

Other interfaith and local leaders also had a message to share with students.

"We all have this awesome responsibility to make sure that we're one family in all our diversity," shared Rabbi Peter Levi, of the Board of Rabbis of Orange County.

Students received some new letters, too. Those were from their peers at St. Wilfrid of York in Huntington Beach. In them, students expressed their support to have Orange Crescent students in America.