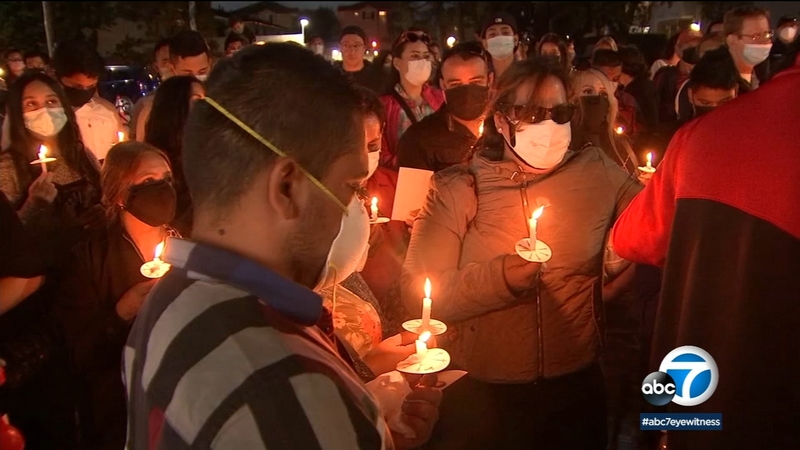 Tributes for OC mass shooting victims pour in during vigil

ORANGE, Calif. (KABC) -- Heartache and overwhelming grief for loved ones overflowed Sunday night during a candlelight vigil for the victims of last week's mass shooting in Orange.

Adults and children wept while holding each other tight -- many clutching photos of the shooting victims -- as they stood near a memorial filled with flowers and candles.

"She was a beautiful soul. She could light up any room. Her smile, her soul was so genuine; she loved people," said Nohemi Cornejo, the cousin of 28-year-old Genevieve Raygosa.

Raygosa, her father, Luis Tovar and her 9-year-old brother Matthew Farias, were killed by the gunman who opened fire at an office building on Wednesday. The suspect was identified as 44-year-old Aminadab Gaxiola Gonzalez, of Fullerton, Orange police Lt. Jennifer Amat said. Authorities say Gonzalez knew all the victims either through a business or personal relationship.

Orange mass shooting: Boy, 9, died in the arms of his mother, who was shot trying to protect her son, OCDA says
EMBED More News Videos

A devastated family member spoke to reporters after his mother, father and younger brother were killed in a mass shooting at an office complex in Orange.

"I can't even imagine what they both felt, those last moments knowing that it was just not gonna look good for them," Cornejo said.

Matthew's mother, Blanca Ismeralda Tamayo, was wounded during the shooting but survived. She remains hospitalized in critical condition.

"I can't even imagine what my aunt felt when she was holding Matthew in her arms, knowing that her daughter had already probably been killed," Cornejo said.

The death of Matthew, described as a sweet and loving boy, has devastated family members, as well as classmates and teachers at his school.

"His teacher in his class just loved him so much. He was a bright spot in their class. Just respectful and kind -- it's just such a loss for everyone," said family friend Debbie Ward.

Leticia Solis, one of Tovar's employees, also succumbed to her injuries.

The gathering Sunday night brought together a community shocked by the mass murder. Relatives are worried about the long road to recovery and emotional pain facing Tamayo.

"She's strong, she's a fighter. I know she is and I know she's gonna make it through," Cornejo said.