All the stars are closer: Celebrities mingle at the Oscars nominee luncheon 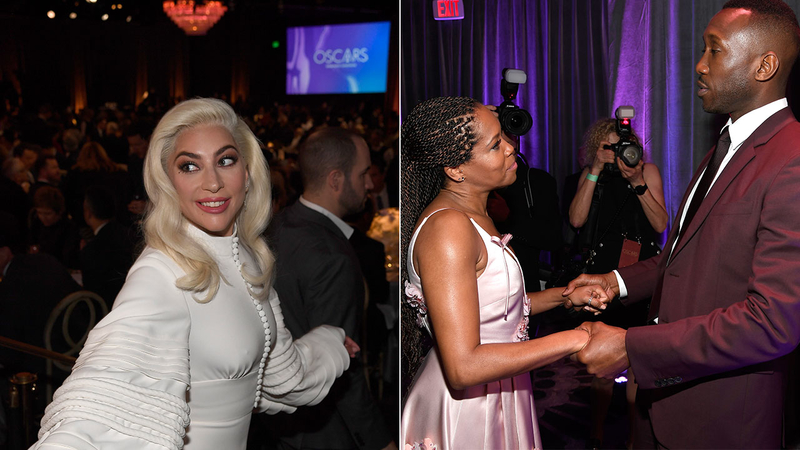 Stars come out for the Oscars nominee luncheon

Winners at this year's Oscars will need to be quick, both in their walks to the stage and their acceptance speeches.

Producers told nominees for the 91st annual Academy Awards that they will have 90 seconds from the time their name is called until when their speech will need to be a concluded. The sprint is needed to keep the Feb. 24 ceremony to three hours, Academy of Motion Picture Arts and Sciences President John Bailey told this year's class of nominees Monday at a private, untelevised luncheon to honor them.

"It means you can hit the parties by 8:15," Oscars producer Glenn Weiss reminded the dozens of hopefuls in the ballroom of the Beverly Hilton, the same room where the Golden Globe Awards are held.

Weiss and his co-producer Donna Gigliotti showed the room their ideal acceptance speech - Steven Soderbergh accepting the best director award for "Traffic" and promising to offer individual thanks in private, not public - and implored nominees to speak from the heart and not a sheet of paper.

"The thing is, run," said director Brad Bird, who has learned from experience. "Then keep your speeches short and simple as possible ... and then you get out alive."

Acceptance speech how-to is a standard fixture at the annual luncheon, which provides a chance for the nominees, from Lady Gaga to Rami Malek, to socialize ahead of the Oscars ceremony in a low-pressure environment. But beyond the truncated runtime, no mention was made of the uniqueness of this year's show, where some awards will be handed out during the commercial break, and there may not even be a host for the first time in 30 years.

While some below-the-line nominees in the editing and sound mixing categories complained in private about how "insulting" it is to not air all the awards during the main broadcast, the tenor of the star-studded event was largely celebratory.

"Today in its purest sense is a celebration of being part of a collective community," said film academy governor Laura Dern. "This is our opportunity to recognize your profound input."

Aside from the famed "class photo" in which every nominee is called individually to the front of the room, mingling is the main game at the luncheon, where many stars, like Gaga, ignore their salads and fish dishes to socialize.

Gaga at one point made her way to Bradley Cooper's table, where she ran into her fellow best actress nominee Yalitza Aparicio. At a nearby table, Cuaron, the "Roma" director, had a private conversation with "Green Book" director Peter Farrelly.

One of the trickiest feats to coordinate is getting all the socializing nominees to actually take their seats to get the festivities started.

With only one minute to go before the "official start," Regina King, Amy Adams and Richard E. Grant stayed deep in conversation while Marvel chief Kevin Feige snuck in a word with Cooper. The academy joked about the problem on Twitter, writing: "We've reached the part of the #OscarsLunch where the announcer asks nominees to take their seats and...the nominees just continue to mingle and have amazing conversations. We get it."

The event often creates a fascinating mix of film stars and newcomers, as nominees are often seated with a mix of people from films that aren't necessarily their own. One table had Adams, "Black Panther" costume designer Ruth E. Carter and "Bao" director Domee Shi. Another had Gaga, Feige, jazz trumpeter Terence Blanchard, nominated for "BlacKkKlansman," and "Hale County This Morning, This Evening" director RaMell Ross.

Ron Stallworth, whose story became the basis for "BlacKkKlansman," headed straight to the bar when he entered the venue and said being there was "crazy." He was seated at a table with director Spike Lee, who brought Stallworth's story to the big screen and earned six Oscar nominations, including for best picture and best director.

"RBG" director Julie Cohen stopped to say hello to "A Star is Born" nominee Sam Elliott, while Bradley Cooper said hi to the filmmakers of the nominated documentary "Minding the Gap."

Before the luncheon started, Close, "Free Solo" climber Alex Honnold and director Phil Lord spoke in a circle for about 20 minutes as other guests trickled in.

The hanging out even continued on the bleachers waiting for all the nominees to be called for the photo. But unlike the Academy Awards broadcast, there was no rush here. All the nominees proudly cheered on their own, one by one. And as if designed to ensure a teary-eyed Gaga, right as the photos were about to be snapped of the full class, "Shallow" started playing faintly in the background.