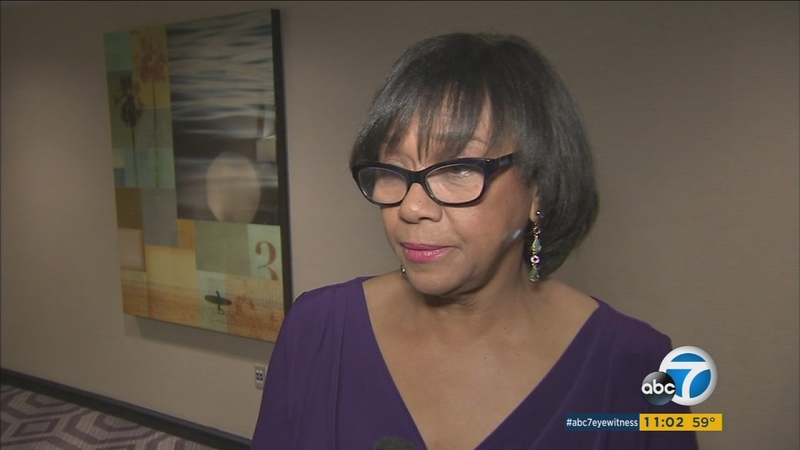 WESTCHESTER, LOS ANGELES (KABC) -- The Academy of Motion Pictures Arts and Sciences Cheryl Boone Isaacs spoke to Eyewitness News about the lack of diversity at this year's Oscars amid calls from some stars to boycott the award show.

She said the Academy is working to bring about more diversity in its membership.

"What we really need is the support of the industry across the board - the entire industry - in our effort to actually get this accomplishment done," Boone said.

Earlier Monday, Isaacs released a statement, saying she was "heartbroken and frustrated about the lack of inclusion."

"This is a difficult but important conversation, and it's time for big changes. The Academy is taking dramatic steps to alter the makeup of our membership," the statement read in part.

Actor David Oyelowo, who portrayed Dr. Martin Luther King Jr. in the movie "Selma," is among those in Hollywood disappointed by the lack of diversity in this year's Oscar nominations.

He took the podium at Monday night's event to present Isaccs with her award. Before introducing her, Oyelowo said what was on his mind about the lack of diversity at the Oscars.

"For 20 opportunities to celebrate actors of color, actresses of color, to be missed last year is one thing. For that to happen again this year is unforgivable," Oyelowo said. "The Oscars is on Feb. 28. Cheryl needs us to pray that by that date, change is gonna come."

"Begging for acknowledgement, or even asking, diminishes dignity and diminishes power," Pinkett Smith said in a video posted to Facebook. "And we are a dignified people and we are powerful."


Alongside Pinkett Smith, director Spike Lee, who won an honorary Oscar in November, also said he will boycott this year's Oscars.

Pinkett Smith's husband, Will Smith, Idris Elba and Michael B. Jordan are among the actors many believed were snubbed by Academy voters, as well as the film "Straight Outta Compton."

"The Academy can nominate up to 10 movies and chose to nominate only eight and 'Straight Outta Compton' wasn't part of that mix. It just sort of left you wondering, 'Ok, what's going on here?'" said Gil Robertson, the president of the African-American Film Critics Association.

Robertson credits Isaacs for working to increase diversity within the awards organization and says boycotting a show produced by an African-American and hosted by one may not be the best solution.

Actor, producer and studio executive DeVon Franklin told the crowd at Monday's gala not to be negative.