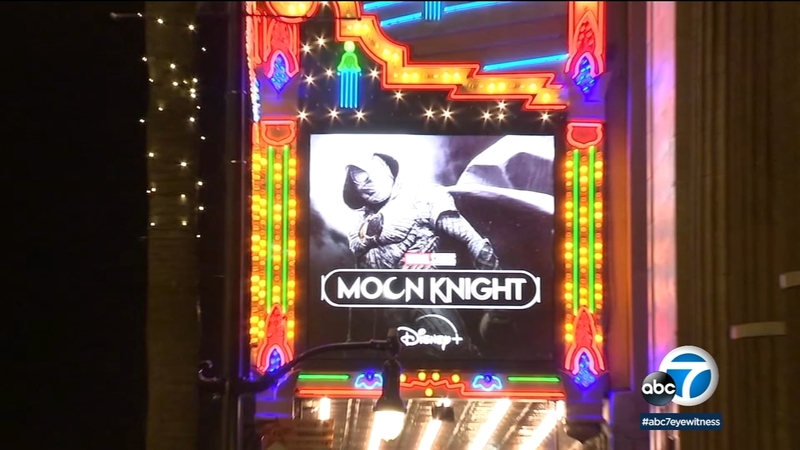 HOLLYWOOD, LOS ANGELES -- As we countdown to Oscar Sunday, things are busier than ever outside the Dolby Theatre. But the Oscars aren't the only big event crowding Hollywood.

"Moon Knight," the new series for Disney+, had a special event Tuesday, March 22, at the El Capitan Theatre. But with no room on Hollywood Boulevard for a carpet, the studio set up shop in the parking lot behind the theater.

It's back to business, one way or another. And the stars of "Moon Knight" are happy to see it.

"I haven't been to an old-fashioned premiere for a long time and it feels good to see everybody out. I just, I want to put this in the rearview mirror, you know?" said Ethan Hawke.

"We don't care. We will do it anywhere. As long as we have our fans and we're together, it doesn't matter," said Sofia Danu.

Oscar Isaac plays the title character in this series that is very different for the Marvel Universe.

"I think you can expect a very wild, you know, psychological thriller, an Indiana Jones-like adventure, some elements of horror but at the core of it, a real story of healing from emotional trauma," said Isaac.

"At its core, it's a story about learning to live with yourself. And who can't identify with that?" said director and executive producer Mohamed Diab

"But there's still going to be great humor and humanity in it and a lot of psychological complexity," said actor Rey Lucas.

Mark your calendar: March 27 is Oscar Sunday. Special "On The Red Carpet" coverage begins at 1 p.m. ET/10 a.m. PT and continues all day leading up to the 94th Academy Awards ceremony. After the last award is handed out, stay with "On The Red Carpet" for continuing coverage. Be sure to follow @OnTheRedCarpet on Facebook, Twitter, Instagram and TikTok for all your Oscar news and information. Click here to download our CTV apps to watch "On The Red Carpet" wherever you stream.