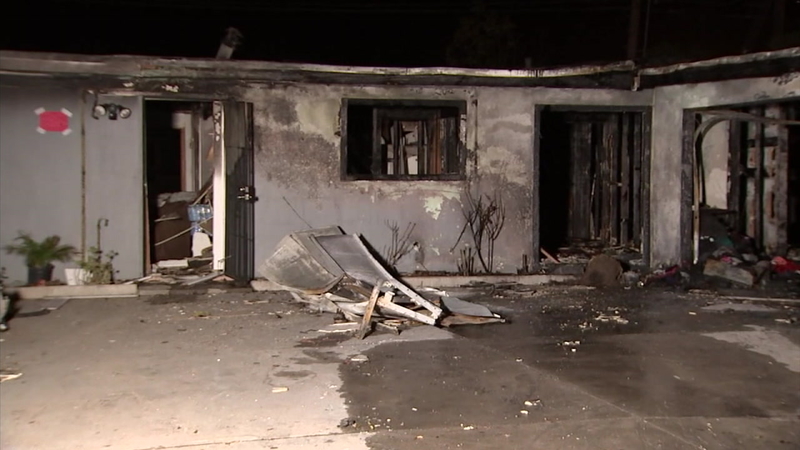 The explosion happened around 8 a.m. in the 400 block of Lamar Avenue in the El Rio neighborhood. Witnesses said they heard multiple explosions from a home in the area.

When firefighters arrived, a home was engulfed in flames. A mother's anguished screams were captured on camera as a family was trapped inside.

The mother, father and their infant daughter were badly burned. Neighbors said they were heartbroken by what they'd witnessed.

"She saw the father come out shirtless and he was covered in black ash. The baby also had half the face burnt and the mother came out looking very worried and it was just a terrible thing to see," Michelle said.

The victims were rushed to a hospital in unknown conditions as firefighters worked to put out the fire. Residents had reported hearing one loud explosion that rocked the neighborhood and then several smaller ones.

"About 3 minutes after the explosion, she saw the fire and she said it was really big. After 20 minutes, it was just astonishing how big the fire got," Michelle said, translating for her mother.

Neighbors said the young family was renting a room in the home when the explosion appeared to come from the garage.

Authorities said the explosion had destroyed a significant part of the home.

Devastated neighbor Maria Rodriguez described the horrible injuries the young mother and her little girl suffered. She said the family is from Mexico and their lives were suddenly ripped apart by the violent explosion.

"The husband was burned. It was all so sad. (The infant) had her whole face burned," she said in Spanish.

The fire was eventually knocked down, and crews stayed at the scene for several hours.