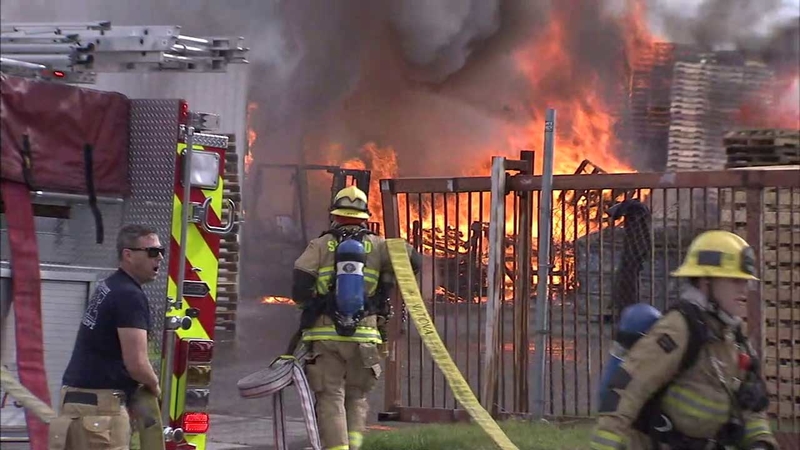 FONTANA, Calif. (KABC) -- A pallet yard in Fontana caught fire on Thursday, shooting flames and plumes of thick smoke up in the air.

The second-alarm blaze was first reported around 9:17 a.m. in the 8400 block of Sultana Avenue, according to the San Bernardino County Fire Department.

Officials said a forklift operator suffered second- and third-degree burns and was transported to Arrowhead Regional Medical Center for treatment.


According to the fire department, one structure, one trailer and multiple pallets were engulfed in flames.

Efforts to douse the flames were made more difficult and dangerous after several explosions ignited stacks of wooden pallets on the property.

Firefighters believe the blaze ignited in an area called the "kiln," where wooden pallets are dried at the yard, known as the Ramirez Pallets.

An employee told Eyewitness News that the blaze started after a heat treater used to dry pallets possibly ignited a leaking propane tank.

"The fire got really hot, started whistling, then there's a massive explosion, and maybe three, four seconds after that, it exploded again, and everybody just started running at that point," witness Don McCauley said.

The bulk of the fire was knocked down shortly before 10 a.m.

The exact cause of the blaze was not immediately known.