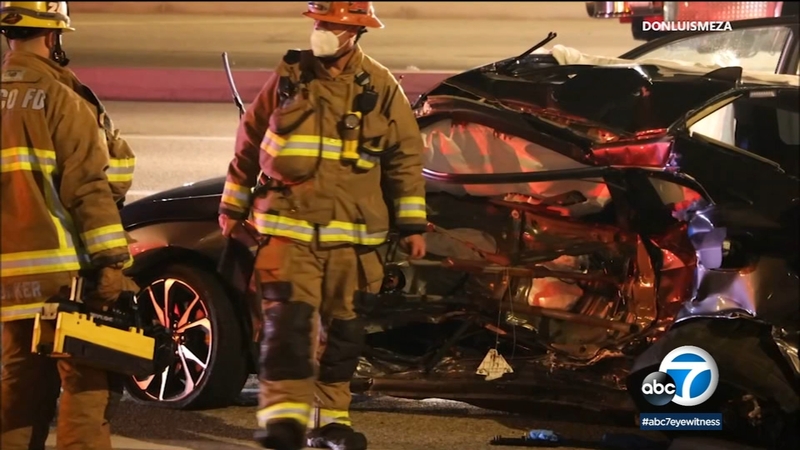 PALMDALE, Calif. (KABC) -- A 17-year-old boy and an 18-year-old man were killed late Saturday evening in a hit-and-run collision in Palmdale, prompting a search for a suspect who fled the crash site on foot, authorities said.

Deputies responded shortly before 10:30 p.m. to the area of 10th Street West and Avenue O-8, where the two victims were pronounced dead at the scene, the Los Angeles County Sheriff's Department said in a statement.

A preliminary investigation indicated that a black 2015 Chrysler was driving northbound on 10th Street West when the driver of that vehicle ran a red light at Avenue O-8 and slammed into a dark gray 2018 Honda Civic, according to authorities.

The Honda, occupied by a driver and passenger, was heading westbound on Avenue O-8 at the time of the impact, investigators said. The driver of the Chrysler fled before deputies arrived.

The identities of the victims were withheld by officials, pending the notification of family.

News video from the crash site showed several distraught people arriving at the location and approaching the Honda's wreckage before deputies intervened. Whether the individuals were relatives of the victims was unclear.

A description of the suspect, who remained at large, was not immediately available.