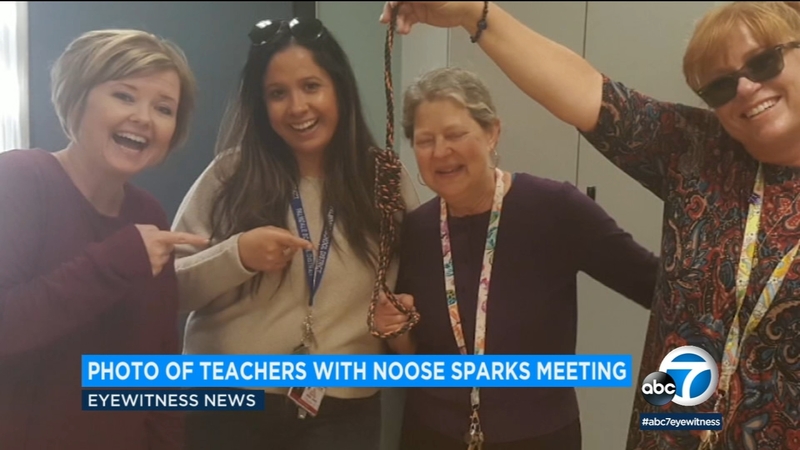 PALMDALE, Calif. (KABC) -- A town hall meeting was held Tuesday regarding a controversial photo showing teachers at a Palmdale school holding a noose, smiling. Community members were divided in their opinions.

"What's a hangman's noose? What it is for and how are you going to explain that to a 9-year-old kid that back in the day that was used to hang black people and Hispanics?" asked Arturo Flores, a parent.

"It speaks for itself even if they said it was something to joke about you don't joke like that," said Rhavae, a parent.

The school district's special counsel is exploring several possible theories behind a controversial photo that shows teachers holding up a noose and laughing about it.

"My 10-year-old says to me, 'Mama if they're holding a noose, are they going to hang us?" Nadia Jones, another parent, said at the packed meeting.

The district said the photo was taken and distributed May 1 by the principal , Linda Brandts. The district is trying to reassure the community that they are investigating the incident and trying to figure out what was behind the act.

The district's special counsel put forth theories they're looking into.

"Just an expression of 'hang in there' if you will, we're getting close to the end, til summer," the special counsel said. This theory drew jeers from the crowd.

"Within 30 minutes, an investigation was started, and within an hour, the principal was placed on admin leave," Garcia said.

All four teachers are also on paid leave. One of the teachers, Jennifer Garcia, taught Gabriel Fernandez, the 8-year-old boy who was tortured and murdered by his mother and her boyfriend in 2013. Garcia reported the abuse and testified in court.

The district's special counsel said that's another theory they're looking into - that the teachers were holding the noose to symbolize the death penalty sentence in that case. Many parents say they're shocked Garcia is in the photo.

"I've watched her take money out of her pocket to make sure kids went on field trips. So it hurt when I saw it. I was the first to say there has to be more to the story," Jones said.

Community activist Najee Ali was also there for the meeting, saying there are several things teachers and other school officials should never do when dealing with students of color.

"One, use the N-word, two is use black face, and three is use a noose to make any type of point, and that's why we are demanding the principal and teachers be fired because what they did was racially offensive," Ali said.
Some said they still want to know more about the situation before coming to a conclusion.

"Personally I can't judge the picture yet because I have to hear the teachers out loud when they get a chance to speak," said Evan Saltido, the student vice president of Summerwind.

Evan said he'll reserve judgment until the results of the investigation into the incident come to light. He also says he knows some of the teachers in the photo and says they've never shown him anything but respect as educator

"Personally I've never felt any discrimination toward me," Evan said.

Some parents of color told Eyewitness News that they can't speak about the picture, but they don't believe the teachers involved or the principal are racist. Claudia Saltido, Evan's mother, agrees.