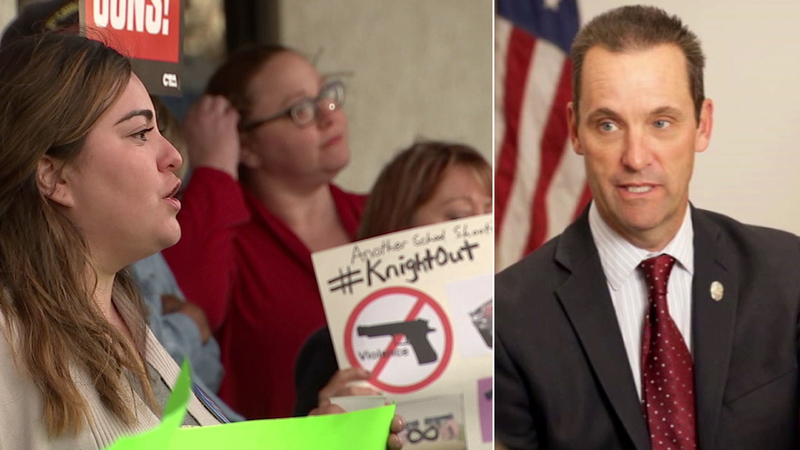 PALMDALE, Calif. (KABC) -- Just a day after a school shooting in the area, a vigil was held in Palmdale Saturday night, meant to shed light on gun violence and a local congressman some community members say is part of the problem.

The gathering of protester took place outside the Palmdale District office for Republican Congressman Steve Knight.

Brandon Zavala said Knight holds an A-rating from the National Rifle Association, an organization he's accepted more than $15,000 from.

"He needs to support the communities that support him, by, No. 1, not taking funds from the NRA, and putting our children first here in the Antelope Valley," Palmdale resident Marcos Alvaraz said.

Sofia Avila attended the rally, still rattled by the frightening scene at her campus, Highland High School, where a 15-year-old boy was shot by a 14-year-old former student.
EMBED More News Videos

A 15-year-old boy was wounded and a teen suspect was detained Friday morning in a shooting at Highland High School in Palmdale.

The boy was shot in the arm and is expected to make a full recovery.

"That isn't what a child going to school should be worrying about. They should be worried about getting good grades and getting into college," said Zavala.

In a statement released after Friday, Knight said, "The incident continues to underline the urgency we are facing in America to make our schools safer," and he touted a bill he recently authored that would provide funding for active shooter deterrents and training.

Avila is among those at the event Saturday saying that it's not enough. She's asking Knight to stand with Palmdale.

"I'm glad I'm here, and I'm speaking out and that I'm trying to make change," she said.

The group is encouraging their supporters and the people of Palmdale to contact the congressman's office. They believe that's their only hope in having the congressman take action.
Report a correction or typo
Related topics:
palmdalelos angeles countyschool shootingprotestgun safetygun violenceshootingvigilrallycongressguns
Copyright © 2021 KABC-TV. All Rights Reserved.
More Videos
From CNN Newsource affiliates
TOP STORIES