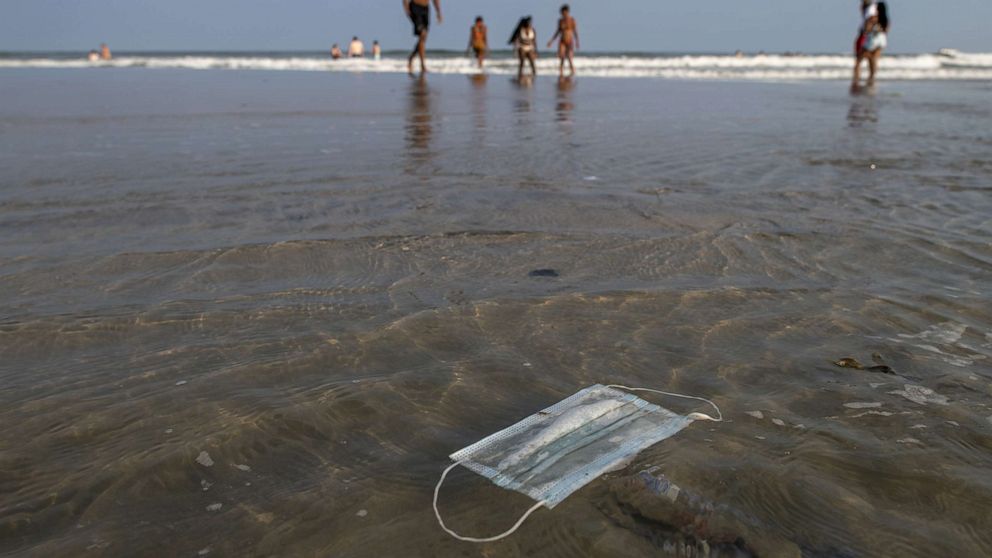 Every week we'll bring you some of the top climate change news you may have missed.

This is "It's Not Too Late" with ABC Chief Meteorologist Ginger Zee. On ABC News Live and abcnews.com.

Here are a few of this week's environmental headlines:

At least 14.6 million American homes and businesses are at risk of severe flooding. That's almost twice as many as FEMA thought.

First Street Foundation, the group that did the study, added sea-level rise, rainfall and flooding in smaller creeks to the equation.

A typical June high temperature in the area is 68 degrees.

The town is consistently one of the coldest places on the planet -- temperatures last November dropped to almost 60 degrees below zero.

The Arctic is among the fastest-warming regions in the world, heating at twice the global average.

Communities across the country have seen examples of increased litter during the coronavirus pandemic -- especially masks and gloves discarded on the ground -- and environmentalists are concerned the increased use of single-use products like masks, gloves, bags and disposable silverware will lead to more plastic waste making its way into the ocean.

In a Facebook post, the nonprofit said it worries, "we will eventually have more gloves than jellyfish."

The group 4ocean, which cleans up beaches in the United States and across the world, said they've found hundreds of masks and gloves in their limited beach cleanups since shutdown restrictions have been lifted.

"So that one mask probably represents hundreds of thousands, if not millions, of microplastic particles when it all gets broken down," Mark Benfield, an LSU oceanography professor, told ABC News Live.

Benfield studies microplastics and has a new study on COVID-19 waste that found there are at least 75 gloves per city block in Brooklyn. He said every one of those will wash into storm drains and, eventually, into the ocean.

World consumption of vinyl gloves is estimated to jump more than 11%, equal to 330 billion pieces, this year.

"The sad reality is 9 million metric tons of plastic enter the ocean every year. And scientists tell us that unless we change the way we use plastic within the decade, for every three pounds of fish in the ocean, there will be one pound of plastic," said Judith Enck, a former EPA official who founded the organization Beyond Plastics at Bennington College.

But Enck said that what worries her more than the impact of the pandemic is if more facilities start to produce single-use plastics in the U.S.

According to the American Chemistry Council, 343 new plastic production plants and expansions are currently permitted or planned in the country.

Globally, in the next five years, the rate of plastic production is projected to increase by one third. By 2050, it is expected to triple, according to the World Economic Forum.

Many facilities will produce ethane crackers, a raw material for plastic products that uses ethane produced as a byproduct of natural gas production.

"Plastics... provide important benefits to society, lightweighting our cars, packaging our food, keeping it safe for society [but] we need to keep it out of the environment, our circular economy goals," said Keith Christman, the Managing Director of Plastic Markets at the American Chemistry Council. The goal is to recycle and recover all plastic packaging in the United States by 2040."

Groups like the American Chemistry Council say the country is going to use plastic products no matter what, so they should be manufactured in the U.S. and companies can invest in better infrastructure for recycling.

Many of the current proposed ethane cracker facilities are in Ohio, Kentucky, West Virginia and Pennsylvania. They say plastic is a better alternative for shipping than say, glass, which has impacts for climate change.

"We can't go back to alternative materials. The alternatives, in the case of packaging, would double greenhouse gas emissions, so that's an important thing that people need to recognize as well," Christman said.

Environmentalists don't think those benefits outweigh the other risks, especially since many facilities are proposed near low-income communities of color that are already exposed to more air pollution.

"This is not any vote that happened in our legislature, this is not consumers saying, 'We want more plastic.' This is the petrochemical industry trying to save the fossil fuel industry and states like Pennsylvania shockingly are subsidizing this," Enck said.

The state of Pennsylvania created up to $1.6 billion in tax incentives for ethane cracker facilities under the requirement they create at least 2,500 construction jobs.

"There there have been studies done on these new facilities. they're modern state of the art facilities," Christman said. "They are lower-impact than others built in other parts of the world."

If there is an increase in plastic production, environmentalists hope that there is a serious effort to recycle more. "The plastic recycling rate is an anemic 8% nationwide," Judith said. "So, that means if you're not recycling 92% of the plastic, it's either being littered in landfills or burned at an incinerator."

The American Chemistry Council and environmentalists do agree on at least one thing: Nobody wants plastic in the ocean.

So what action is being taken now?

The Department of Energy has launched an initiative to develop better ways to recycle plastic, working with the ACC to invest in new technology. State and local officials have pushed for laws to reduce the use of single-use plastics, and one bill on the federal level, the Break Free From Plastics Act proposed by Sen. Tom Udall, would require manufacturers to take more responsibility for producing recyclable packaging and taking on some of the costs.

France is looking to increase littering fines to combat pollution amid the pandemic. The European Commission is pressing on with its single-use plastics ban despite pressure from lobbyists. And in Australia, an ask for residents to go plastic-free in July.
Report a correction or typo
Related topics:
abc newsnational
Copyright © 2020 ABC News Internet Ventures.
More Videos
From CNN Newsource affiliates
TOP STORIES