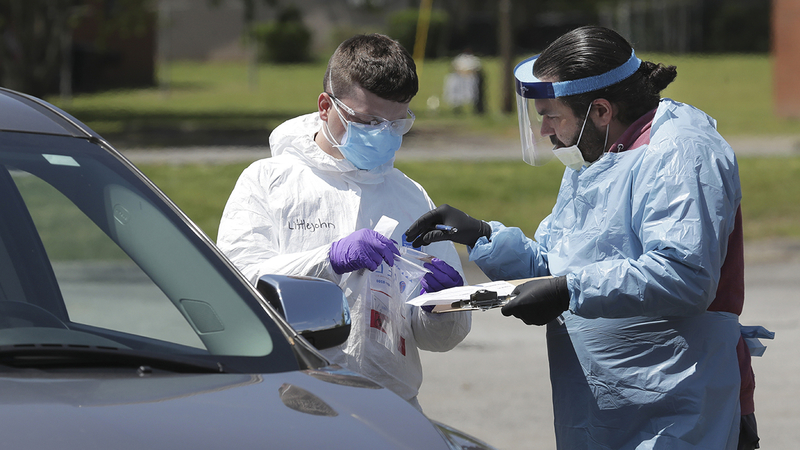 States struggle with testing capacity as protests over restrictions grow

WASHINGTON -- Vice President Mike Pence says 150,000 coronavirus tests are now being conducted daily in the U.S. but suggested that governors and not the federal government were to blame for numbers not being higher.

Pence tells NBC's "Meet the Press" that, "if states around the country will activate all of the laboratories that are available in their states, we could more than double that overnight."

He said the nation has "sufficient testing today" for states to begin reopening their economies as part of the initial phases of guidelines the White House released this week.

Governors from both parties have said that while they do have more labs that could increase testing in many areas, they often are unable to do so because of federal delays.

Pence was also asked about President Donald Trump tweeting that Democratic governors in Minnesota, Michigan and Virginia should "liberate" their states - even though officials there are following many of the Trump administration's own guidelines about slowing the spread of coronavirus.

Pence sidestepped those, saying, "This president wants to reopen the American economy as soon as we can safely and responsibly do it."

RELATED: List of states planning to reopen retail, parks by May 1

The death toll in the U.S. is nearing 40,000 with more than 735,000 confirmed infections, and the global case count has passed 2.3 million, according to a tally by Johns Hopkins University of national health reports. The actual extent of the pandemic is likely to be significantly higher due to mild infections that are missed, limited testing, problems counting the dead and some nations' desires to underplay their outbreaks.

Supporters of President Donald Trump protested in several states Saturday, ignoring social distancing and stay-at-home orders to demand that governors end controls on public activity. They were goaded on by Trump tweets.

Trump is pushing to relax the U.S. lockdown by May 1, a plan that hinges partly on more testing.