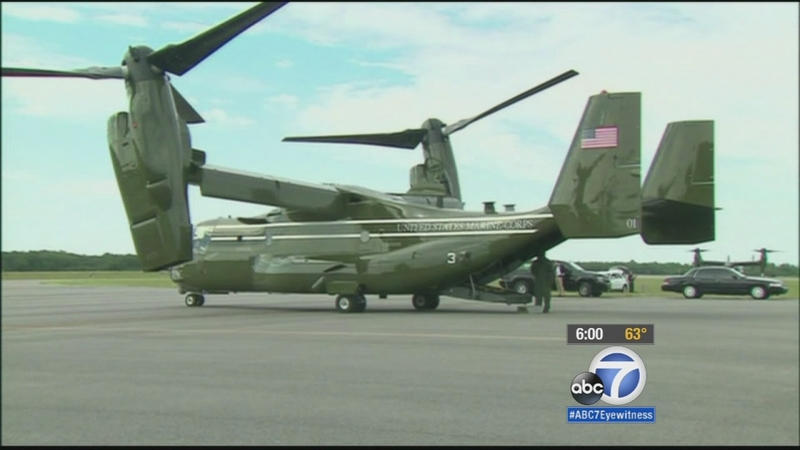 DOWNTOWN LOS ANGELES (KABC) -- The Marines are bringing their training to the downtown Los Angeles area. Officials say residents shouldn't be alarmed if they see or hear military aircraft overhead.

What in the heck was this flying so low above us on the 101?! #ABC7Eyewitness pic.twitter.com/pGgZI1pWBd

The Osprey can fly as both an airplane and a helicopter. The U.S. Marine Corps says we'll be seeing more of them over Los Angeles next week.

A Marine Corps spokesman told Eyewitness News that the Marines are taking a break from their regular training at Camp Pendleton.

"We do a lot of training on Camp Pendleton. It's very easy for us to sort of become familiar with all the training locations. So, mixing it up and going to some place like L.A., it's brand new terrain, it's unfamiliar, it forces you to think a little more," said Capt. Brian Block.

This does not mean you'll see Camp Pendleton-style tanks roaming through the streets of downtown Los Angeles. But you will see helicopters and other aircraft flying to remote, secret training locations here in Southern California.

"We are going to do everything we can to minimize the noise impact on the local communities. We understand people have lives, but it's also important for us to get that realistic training," Block said.

Many Southlanders say they're looking forward to it.

"They should probably put signs up so we don't think we're under attack or something like that, but I think it'd be cool. I'd be down to see it," said David Noble of La Mirada.

Most of the training exercises are slated to happen in the late afternoon and early evening hours. The training will run through Dec. 16.