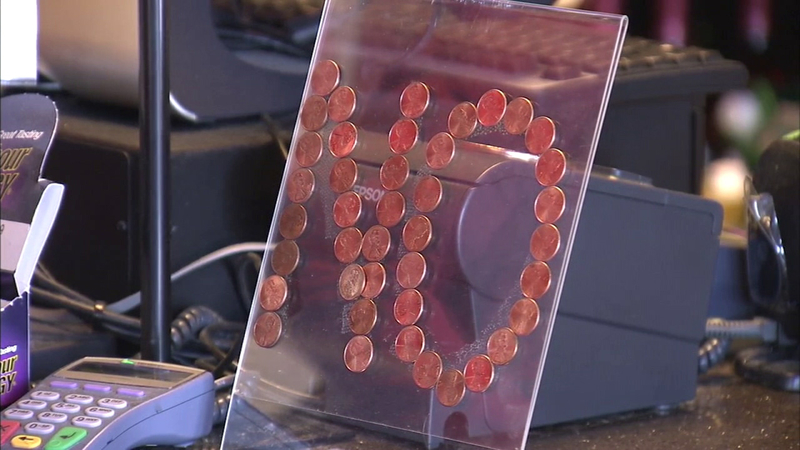 FULLERTON, Calif. (KABC) -- To some, a penny saved is a penny earned.

And some consider it good luck if you find one on the ground.

But to Roland Foss, pennies are a nuisance.

To some customers, it's not a big deal.

"I'm fine with that," said Yorba Linda resident Alex Guibert. "I usually have a debit or credit card. I don't really have cash on me."

Others, however, were caught off-guard.

"I have a lot of coins. I want them to use pennies," said Fullerton resident Olea Olson, who once collected about $300 in pennies in her piggy bank.

Foss said getting rid of the penny saves time and money.

His store sits near a high school, and Foss said at lunchtime it's not uncommon to do 100 transactions in 25 minute.

Without the penny, Foss said he can increase those transactions.

"We can fit in two or three extra transactions and that's hundreds of dollars a month that we can save," said Foss.

Canada said goodbye to the penny years ago as the Royal Canadian Mint stopped making and distributing the penny in 2013.

Part of the reason is the rising cost to make the penny compared with its face value.

The estimated savings for taxpayers by phasing out the Canadian penny is about $11 million a year.

"Am I jumping on and doing it for my store? Not quite yet," said Julie Rasmussen, owner of Roadkill Ranch and Boutique in Fullerton. "But I do appreciate his forward-thinking."