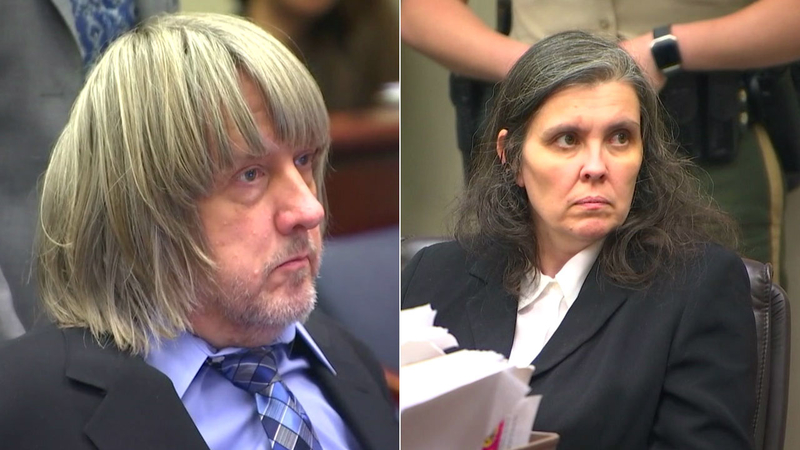 PERRIS, Calif. (KABC) -- A judge has issued a protective order to bar a Perris couple from having any further contact with their 13 children amid a torture and abuse case.

During a court hearing on Wednesday, a Riverside County judge issued a protective court order, which is set to be effective until Jan. 24, 2021.

The names of those being protected in the order were not read, but the district attorney earlier said they're the "victims."

As part of the order, the Turpins cannot keep the victims from testifying in court. They also must not harass, strike, threaten, molest, destroy belongings or stalk the victims. They also cannot have any personal contact with them - whether by writing or telephone.

The Turpins cannot have any sort of contact with the victims, except through a lawyer. They must stay 100 yards away from the victims at all times, except in court.

The order also prohibits them from owning firearms for three years.

Asked about the order after the hearing, the Turpins' public defender, Allison Lowe, said: "It was a standard criminal protective order, which they issue in most of these cases, so there was nothing unusual or atypical about what happened today."

Prosecutors say, the siblings, ranging in age from 2 to 29 years old, were chained to their beds for months as punishment. They were allegedly fed once a day and only allowed to shower once a year.

Deputies arrested the husband and wife after their 17-year-old daughter escaped through a window and called 911. That escape was apparently within days of the family moving to Oklahoma, ABC News learned.

They were jailed on $12 million bail each. If convicted on all charges, the Turpins could face up to 94 years to life in prison. They are due back in court Feb. 23.