Mother was jumping on bench with toddler son before fatal fall at Petco Park, witness says 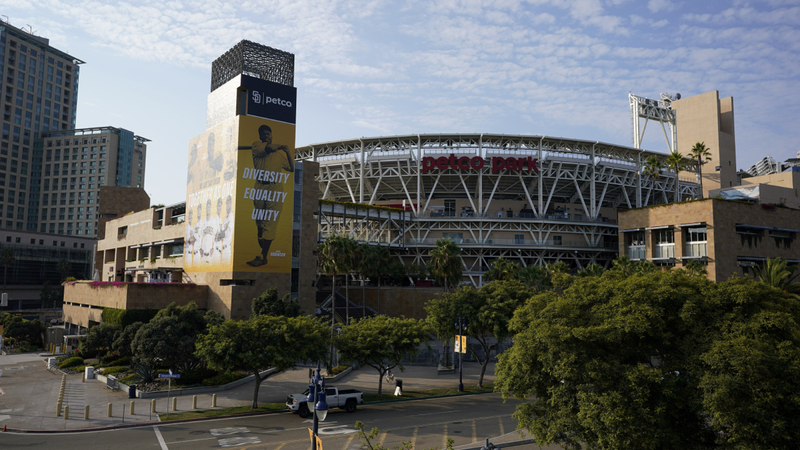 Mom was jumping on bench before fatal fall at Petco Park: Witness

SAN DIEGO -- A woman was holding her toddler while jumping on the bench of a table, near a railing on the third level at San Diego's Petco Park, before both of them fell to their deaths, a local TV news station reported, citing an eyewitness account.

The fatal fall occurred minutes before a Padres game Saturday afternoon, according to a news release from the San Diego Police Department.

Two officers arrived and found the bodies of a 40-year-old woman and her 2-year-old son on the sidewalk.

According to KGTV, a 72-year-old woman who was at the stadium witnessed the incident. The woman's daughter sent a statement to the TV station, saying the witness had crossed paths with the young boy and his parents shortly before the tragedy.

The witness said the father was standing near the railing but the woman held the child and suddenly began jumping on the bench of the table.

A volunteer crossing guard was killed as he saved children from an oncoming car near a Lafayette middle school, his family told ABC7 News.

The witness said the woman appeared to be happy and laughing, even as she lost her balance and fell off the bench onto the ground. About a minute later, the witness said, the woman climbed back onto the bench and then fell over the railing with the child.

There were no screams, the witness said, adding that she heard the sound of the mother and boy hitting the sidewalk.

Officers performed CPR but were not able to save them, and the mother and toddler were pronounced dead at the scene, police said. The victims' names were not released, but police said they were San Diego residents.

Investigators from the San Diego Police Homicide Unit were called to the scene "out of an abundance of caution" after police said the deaths "appeared to be suspicious."

The Padres played the Atlanta Braves at 4:15 p.m. Saturday in front of an announced crowd of about 39,000 people.