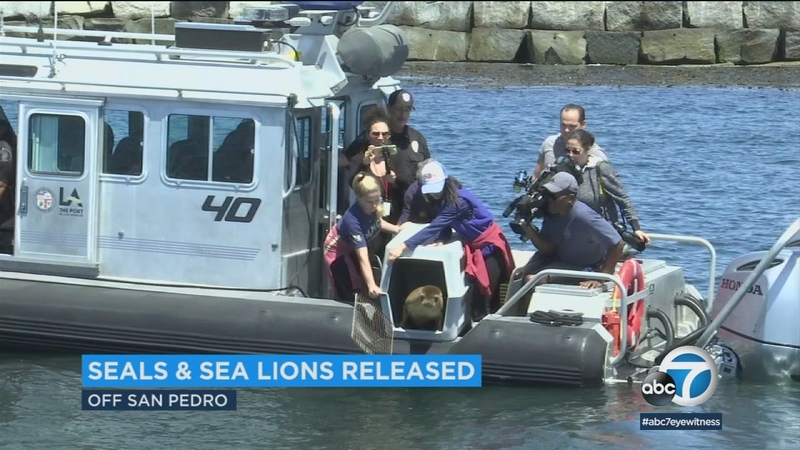 SAN PEDRO, LOS ANGELES (KABC) -- A group of Los Angeles residents are out of the hospital and back home in the Pacific Ocean, thanks to the LAPD SWAT team and Los Angeles Port Police.

The officers share the water with the seals and sea lions as part of a tactical waterborne unit, but have never volunteered their services and boats before for a release, until Wednesday.

"I personally have called the hotline when I've observed a seal or seal lion in distress and these people are amazing. They do great work and a lot of what they do is based on donations from the public," said SWAT officer Jennifer Grasso.

"When we were given the opportunity to partner with them and get the word out on the work that they do and the help that they need in doing that work, we were thrilled."

Wednesday morning, the animals were loaded into vehicles at the Marine Mammal Care Center in San Pedro, given a police escort to the law enforcement boats, and taken out past the breakwater to be let free.

They've spent the last six to 12 weeks at the hospital after being picked up from the ocean between the Ventura County line and Seal Beach.

The animals end up in the care of doctors after incurring a shark bite, getting caught in a fishing line, drinking chemicals in the water, or being separated from their mother before they can live on their own.

"The first thing we're doing is a medical evaluation and prognosis and a treatment plan. Then we start by hydrating. Then we graduate to a nutrient fish smoothie we make in blenders. Then we teach them how to eat a fish whole, head first," said Jeff Cozad, executive director of the Marine Mammal Care Center in San Pedro.

On average, it costs $5,000 to rehabilitate the animals.

"It's part of the mission of the Los Angeles Police Department to reduce the fear and incidents of crime in the city, but to also improve the quality of life for the residents of Los Angeles and I think partnering with the marine mammal care center, we're doing just that," said Grasso.