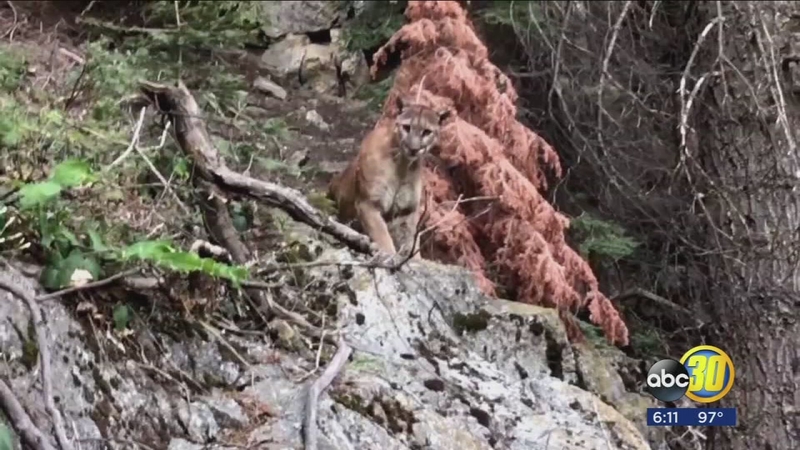 Hiker talks about encounter with mountain lion caught on video

FRESNO, Calif. -- Brian McKinney captured video of a terrifying encounter with a mountain lion on a High Sierra trail in California's wilderness.

McKinney and his hiking partner, Sam Vonderheide, were backpacking the High Sierra trail at Sequoia National Park when they came within feet of the mountain lion. They tried scaring it off, but the lion wasn't fazed.

In the video, the two men freeze upon seeing the animal, and one can be heard asking, "What are we supposed to do?"

Vonderheide told ABC7 sister station KFSN-TV that the encounter happened last month on the first day of an 11-day hike on the trail.

He said the confrontation lasted about 15 minutes and that in that time they did everything they could to distract the animal without agitating it.

"At that point, we're even more scared. I mean adrenaline is pumping. I don't want to mess with a mountain lion. It will definitely win any day of the week," he said.

The two wound up just walking away, and the lion didn't give chase. They showed this video to a biologist at the park who speculated that the mountain lion just finished hunting and wasn't interested.

Wildlife biologist Daniel Gammons said the men did the right thing by staying calm. Biologists say you should make yourself appear big by waving your arms overhead and scare off the animal, as the men did.

"The big thing these visitors did right was that they didn't panic and run," Gammons said. "Probably the most important message to get out to visitors is not to act like prey if they encounter a mountain lion."

The hikers went home safely but say they didn't sleep much that night.