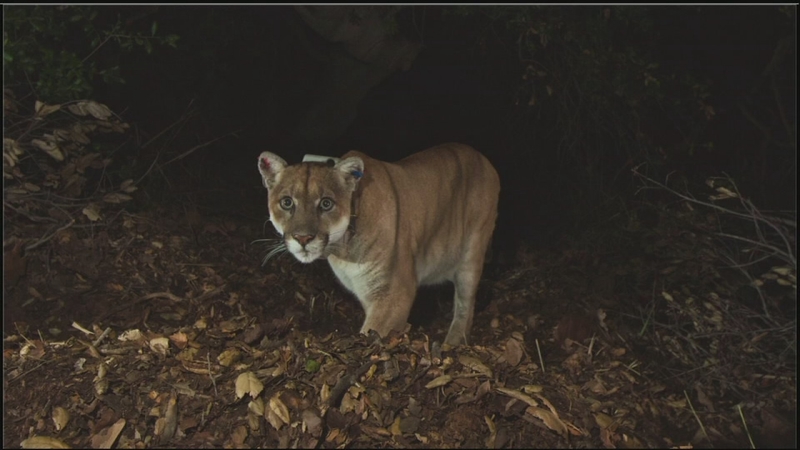 A neighbor told Hofman he saw the mountain lion roaming near his house and advised him to take a look at his security footage.

"I went and took a look. Sure enough, he came strolling down and it was about 9:30. We were actually out that night and were back 20 minutes later, so his time was pretty good. So yeah, it was pretty interesting to see. We've lived here 10 years and hadn't seen him ever," Hofman said.

The excitement of seeing P-22 turned to concern for the safety of his three young children and his neighbors.

Hofman lives next door to Griffith Park, where the mountain lion and other wildlife call home.

"We have three boys, the youngest is 5, so we just don't go let them running out after dark the way we might have before, so it's a little concerning when you realize it's a dangerous animal right outside your door," Hofman said.

Beth Pratt-Bergstrom, who has followed his journey and even has the beloved wild cat's portrait tattooed on her arm, said she has spent most of her life advocating for wildlife conservancy.

Patt-Bergstrom said she got involved in P-22's journey after hearing he may be the first mountain lion to cross the 405 and 101 freeways, making his way into parts of Los Angeles.

"That's how my organization became involved and we lead the Save L.A. Cougars campaign with our various partners to get the wildlife crossing built," she said.

A spokesperson for the Santa Monica Mountains National Recreation Areas, which monitors the mountain lion population here, told Eyewitness News that a sighting like this is extremely rare.

P-22 has lived in the area for around 5 1/2 years. The big cat comes out after dark, from dusk to dawn hunting for food.

This is also a reminder that Griffith Park is home to other wild animals. One hiker put it this way - when you're hiking in the area, you're in their element. You're in their territory.

So according to park rangers and experienced hikers, here's what to do if you come across P-22 or any other wildlife.