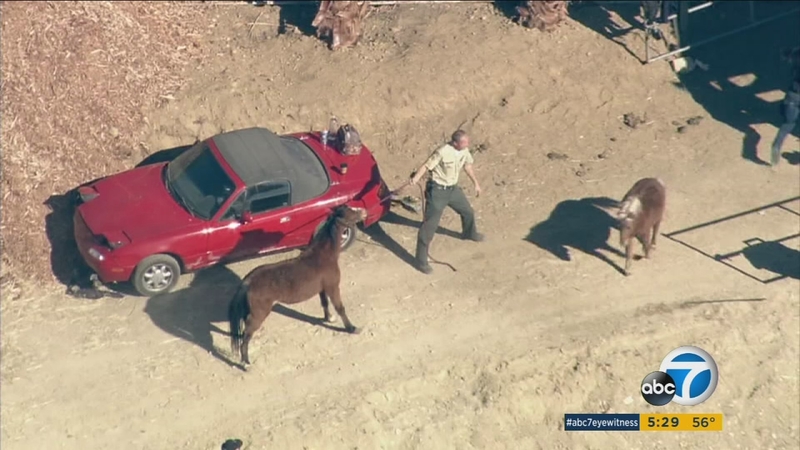 WEST HILLS, LOS ANGELES (KABC) -- Nine miniature horses, five horses, three alpacas, two emus, six cats and one goat were among the animals seized from a property near West Hills on Wednesday after county officials said they were found in inhumane conditions.

The Los Angeles County Department of Animal Care and Control said many of the animals were in bad shape.

"There are various degrees. The horses, some of them are very thin. The cats seem to be OK. Some of the animals may be pregnant on the property, and their living conditions were pretty bad," said Sheri Koenig of L.A. County Department of Animal Care and Control.

Koenig said there was very little water and food for the animals and the conditions on the property were unsanitary.

Neighbors who live near the area were all relieved to see the animals being rescued as some said a few would escape from their cages and roam around the canyon.

Neighbors such as Karen Robert said they noticed the neglect.

"He led on that he was this big rescue animal person. To be honest, I can't see it," Robert said. "Once in a while, I'd see the food truck and they'd drop food off at the gate, but as far as him daily watering or feeding, we never saw it."

County officials said they've worked with the owner since June to improve conditions at the property, but they were at the end of their rope and decided to serve a search warrant and take the animals.

Veterinarians were expected to be on standby to examine the conditions of all the animals.

It was not yet known what, if any, charges would be filed.

As for the animals seized, the owner can either fight to get his animals back or allow the county to adopt them.
Related topics:
west hillslos angelesanimal crueltyanimals in perilanimal abuseanimal rescuepet rescueanimal newsanimal
Copyright © 2021 KABC-TV. All Rights Reserved.
More Videos
From CNN Newsource affiliates
TOP STORIES