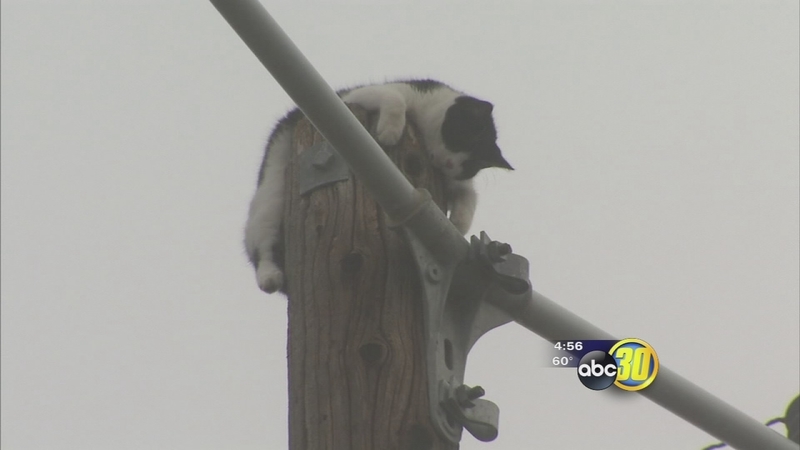 FRESNO, Calif. -- A family cat stranded himself at the top of a 45-foot power pole in southwest Fresno sometime last week. On Tuesday, at least six days later, help arrived.

There he sat all alone. Fat Boy, the king of the world -- 45 feet above ground, perched atop a high voltage power pole for somewhere between six and eight days. His owners figure a neighbor's dog scared him up there, and this fraidy cat was unwilling to come down the way he got up.

"We were calling his name, and he was looking at us, and he'd just meow," said Andrew Perez, Fat Boy's owner.

They tried using wet food to coax him down. They built a tarp to break his fall, just in case. And they called for help -- to animal control, Pacific Gas and Electric Co. and the fire department.

"The fire department came out within minutes and they were really helpful, but they said they could not get the cat because it was on a high voltage pole," said neighbor Anna Robinson.

For days, Fat Boy never made it more than a few inches down the pole. But on Tuesday, the cavalry arrived. PG&E linemen de-energized the power line, knocking out power to about 250 homes. Linemen Porter and Dave geared up and slowly made their way up the pole.

The linemen said almost every cat jumps before they get to the top. But up they went -- grounding the wires, pulling up a cat carrier and reaching out until they had him in their grasp.

Fat Boy still had another 45 feet to go -- down this time -- and when he finally landed on solid ground, he was dehydrated and still a little frisky. Veterinary technicians from a Hanford cat rescue group gave him a shot of electrolytes and some food before handing him over to his owners.

"Thank you," Perez said. "Yeah, thank you for getting him down."


The owners tell KFSN-TV that Fat Boy is happy inside his home now, his perch now atop a couch. And the PG&E crew added some equipment to make sure no more animals ever again sit on Fat Boy's throne.